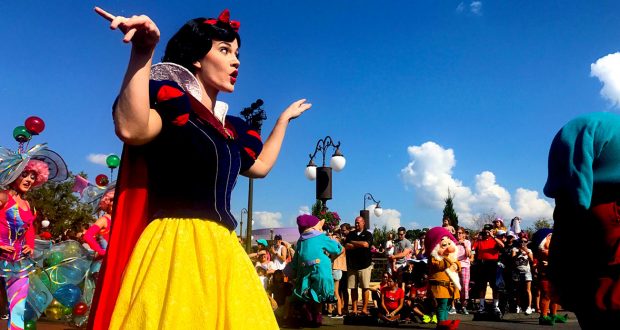 We all know and love Walt Disney World as the happiest and most magical place on Earth. It definitely is, but that doesn’t mean that some pretty crazy things don’t happen there that many cast members and guests wish hadn’t happened. These are all so crazy that there is no way I could or would make this up. You will likely find some of these shocking and downright sad, but you have to respect that Disney handles these situations carefully. Here are ten of the craziest things that have ever happened on Walt Disney World property:

Climbing trees is something we found to be a blast as kids. While we understand that Disney brings out the child in all of us… we would hope we still wouldn’t revert back to our childish ways of bad decision making! Well, in November of 2017, four guests attempted to climb the iconic Tree of Life at Animal Kingdom Theme Park. Security got them down in roughly 20 minutes but we suspect their twenty minutes of fame resulted in no longer being welcome to Animal Kingdom theme park!

9. Piglet punched in the stomach

This actually happened to a Piglet that I knew, personally. Piglet was working at The Crystal Palace and moving from table to table as in a normal evening. He went to a table of two and proceeded to offer the lady a kiss on the hand. Her boyfriend/husband became jealous and enraged by this and proceeded to punch Piglet in the stomach. Piglet ended up with fractured ribs and the jerk who punched poor Piglet ended up banned from Disney for life. Can’t imagine anyone being jealous of poor, sweet, feeble Piglet!

8. Human remains left behind at the parks

This has occurred at several places all over Walt Disney World with the Haunted Mansion being the most popular spot. Folks bring the cremated remains of their loved ones and proceed to scatter their ashes on the grounds, on the rides, in the grass, etc. These remains don’t stay, though, as areas are monitored and they must be removed to prevent any potential safety issues. So, just don’t do it!

Believe it or not, folks have the audacity to complain about Make a Wish groups and exclaim that they don’t deserve special treatment or any extra magic above anyone else. One awful man proceeded to exclaim something along the lines of, “I wish my kid were dying so I could skip lines, too.” He was quickly shunned and booed away from the area. Another woman was so bold as to demand to speak to a manager in order to complain about the unequal treatment that was not warranted for Make a Wish groups. This was after the cast member tried to explain to her what Make a Wish was. She didn’t care and continued to make a scene. I don’t think I’d be able to hold back my thoughts and opinions if I encountered people like this.

6. Fight by the monorail

A group of young adult guys were waiting for the monorail. They proceeded to alternate punching each other, and just really acting inappropriate in a crowd with families around them. One of the guys attempts to send a punch to one of their friends, who dodges and results in the guy hitting a young tween girl behind him. Her tall, big father took issue with his and proceeded to beat the crap out of the guy. It took a few cast members to pull the dad off of the guy and what was left was a bloody mess. Moral of the story, don’t throw punches, even in “fun” at Disney.

5. Parents put their baby in a duffel bag

I know, right? Just the title probably has you shaking your head in shock. The story is that the couple went to ride Space Mountain. They were carrying a duffel bag with them that a cast member noticed moving a little bit. They demanded that the guests open the duffel bag so that they could verify what was in the bag. Come to find out, it was their 6 month old baby that they were trying to sneak on in the duffel bag so they could both ride the ride. I don’t think they will be winning any parenting awards anytime soon! Let’s just hope this poor baby is alive and well and under the supervision of someone more responsible!

A man, his wife and his children were having dinner at Cinderella’s Royal Table. The man proceeded to get the attention of the entire restaurant, and then use this opportunity to announce that his wife (of 15 years) was having an affair and that it had been going on for over a year. He paid the bill, took his children and left the restaurant. His wife remained mortified and sobbing at the table in the restaurant. Goes to show that cheating never ends well!

3. Using cancer as a perk

Again, I can’t make this stuff up, and I certainly wouldn’t keep quiet if I witnessed this level of jerk. A family used their child with cancer in order to get a meet and greet with Darth Vader. They were at the front of the park, and not where Darth Vader would normally meet with guests. The cast went above and beyond to make the magical moment happen for this poor child and then afterward the parents proceeded to comment how much they love cancer. I can’t imagine any parent feeling that saving themselves the walk to the other side of the park was worth their child having a life-threatening, painful illness that has no cure, but apparently these types of parents are out there.

2. A bomb scare in Tomorrowland

Someone left a bag unattended next to Space Mountain in Tomorrowland. The bomb squad was called as a precaution, using the bomb dogs to sniff the bag to determine if there was a cause for concern. (The dog’s name just happened to be Pluto!) Pluto’s reaction seemed to indicate that there could be a bomb threat. Tomorrowland was completely evacuated so that the bag could be inspected more closely. Turns out it was just a bag of food, and a major false alarm. Good to know that Disney takes these precautions to preserve safety, especially with how crazy the world is nowadays.

Even Snow White could be in danger at the “Happiest Place on Earth”. A guy was drinking at Epcot and in a drunken moment of stupidity decided that he could just throw Snow White over his shoulder and try to run off with her. He didn’t make it very far before Snow White was brought back to safety and he was dismissed and banned from the park. No way would Disney security let one of their beloved princesses stay in harm’s way!