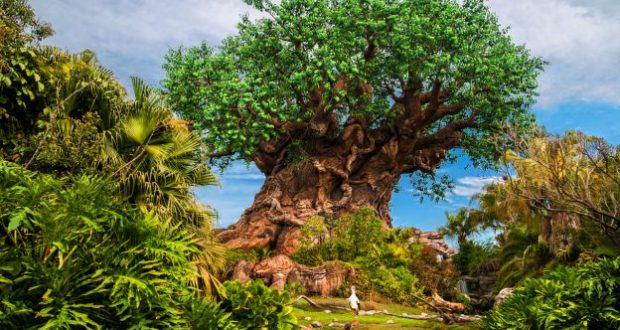 10 Things You May Have Missed at Disney’s Animal Kingdom

Disney’s Animal Kingdom is one of the company’s most immersive and detailed parks, and as a result it’s easy to miss things while rushing between rides and animal encounters. Slow it down and take it all in on your next visit, and don’t miss these 10 things around the park:

The first section of the park that Guests walk through beyond the entrance is the Oasis. Here, you’ll find a number of animal exhibits that can appear hidden behind lush foliage at first glance, especially if you are focused on getting into the park and over to say, Pandora for a ride on Flight of Passage, as soon as possible. The Oasis Exhibits should not be missed though, they’re home to a variety of animals including, a babirusa, giant anteater, boar, barking deer, wallabies and spoonbills.

Similarly, once you are beyond the Oasis Exhibits and near the Tree of Life, many Guests tend to either go right (toward DinoLand and Asia) or left (toward Pandora and Africa). To make sure you’re not missing out on more animal exhibits, we’d head straight into the Discovery Island Trails. Here you’ll see Asian small clawed otters, flamingos, and Cotton Top Tamarins (right outside Creature Comforts, the park’s Starbucks location. By the way, if you order a Flat White, a portion of what you pay will go toward conservation efforts in support of Cotton Top Tamarins.)

The overarching message in Disney’s Animal Kingdom really focuses on the importance of helping animals around the world through conservation efforts. The easiest way to do your part in conservation while visiting the park is to donate to the Disney Worldwide Conservation Fund. The fund provides grants to over 30 non-profit animal conservation organizations around the world each year, and Disney not only covers all of the fund’s overhead costs, but they also match everything Guests donate. Donating can be as easy as rounding up your change at any merchandise or quick service location.

The Wilderness Explorer program at Disney’s Animal Kingdom takes its cues from Russell’s character in “Up!” and allows Guests (kids, but also adults if they want!) to participate in activities around the park to earn badges and become a Wilderness Explorer! The program is a great way for kids to learn more about the animals they’re encountering during their visit and for adults to take in some hidden details around the park that they may otherwise miss. Pick up a book and get started at the Wilderness Explorer stand to the right as you enter Discovery Island.

With the theme of Disney’s Animal Kingdom so focused on the conservation of currently living (albeit often endangered) animals, you may be wondering how DinoLand fits in. DinoLand represents animals who have gone extinct. While humans obviously had no control over losing dinosaurs to extinction, we do have some control over helping to save currently endangered animals, so DinoLand fits the park’s theme by presenting extinction as a consequence. (This message is best spelled out in the mural found in the gift shop of Dinosaur, across from the monitors that show the ride photos, which shows endangered animals of today walking ahead of dinosaurs and other creatures who have gone extinct).

The conservation messaging in Pandora: World of Avatar is best seen through the pre-show videos of Flight of Passage. There, Guests will see firsthand the destruction that is taking place on Pandora, and how it affects animals like the banshees. While Pandora represents a fictional setting, the conservation messaging Guests see is very real and relevant to our world today.

Disney’s Animal Kingdom does not tend to get the hype the other Disney parks get in terms of food offerings. In addition to fan favorite spots like Yak and Yeti and Flame Tree Barbecue, the park actually has some great snack options that we think you should add to your list. Trilobites in DinoLand has rotating selections of nachos, and Mr. Kamal’s in Asia often has seasoned fries and another snack like falafel or hummus and pita. In Africa, Guests can order Dole Whips blended with rum, and back in Asia you’ll find an intricately decorated ice cream truck serving some of the best soft serve at the parks.

Another thing Guests sometimes miss in terms of food in Disney’s Animal Kingdom is the park’s signature restaurant, Tiffins. Expertly decorated under the design consultation of the park’s former director of creative, Joe Rohde, the park really transports Guests to all of the exotic locales seen around the park. The menu is unique, offering blends of African, Indian, and upscale American cuisine, with something for everyone. No reservation? The adjacent Nomad Lounge offers a selection of small bites plus specialty cocktails served in the restaurant.

Each ride on Kilimanjaro Safaris can be totally different, so riding multiple times during your visit is never a bad idea. Some animals are more active in the morning, some after it rains, and others later in the day. You could easily have two totally different safaris by riding the attraction in the morning and again before you head out of the park!

For the ultimate animal experience, book a stay or a restaurant reservation at Animal Kingdom Lodge. The hotel has its own savannas (also making it a great way to see some animals on days when you are not using a park ticket), and restaurants like Sanaa even overlook the savannas so you can have the most beautiful views during breakfast, lunch or dinner. If you’re hoping to stay near the animals, you can book a savanna view room at the resort and wake up to the sights of giraffes, wildebeests, zebras, and more.