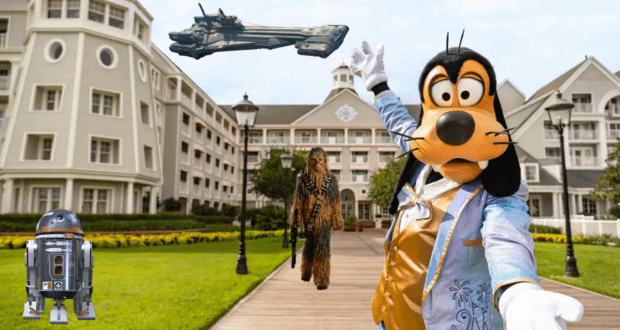 The Walt Disney World Resort is not only known for its theme parks. Disney Resort hotels offer Guests the chance to stay fully immersed in the magic as they explore all four theme parks, water parks, Disney Springs, and more throughout their stay.

While each Resort transports Guests to a unique time and place, where they can feel at home within an immersive setting throughout their stay, there is one overnight experience at Walt Disney World that takes immersion to the next level. The experience itself is more akin to a cruise vacation than a simple overnight stay as dining and activities are (with a few exceptions) included in the cost of a Guests’ voyage. In addition to accommodations, food, and LARP (live action role play)-style activities, a trip aboard the Star Wars: Galactic Starcruiser also includes a day trip to Batuu, aka Star Wars: Galaxy’s Edge at Disney’s Hollywood Studios.

Guests looking to start planning their next trip aboard the Halcyon will now find all of the 2023 reservation details listed online at StarWarsGalacticStarcruiser.com. Booking officially opens on September 1, 2022, for most 2023 voyages; however, we have unofficially heard that Guests interested in booking sooner may have luck calling rather than going online.

Pricing for travel on the Halcyon varies by date, but sample starting prices based on different cabins and party sizes are listed in this screenshot from Disney’s official website:

Availability for the Star Wars: Galactic Starcruiser has been inconsistent since the ship launched this spring, with some weeks filling to capacity quickly and many others having plenty of availability even as departure nears. Still, we always recommend booking early if you are able to as it never hurts to be on the safe side.

Step off the launch pod and into your own epic Star Wars story, one where you decide your fate. While your story unfolds, you’ll have the power to choose your path. Will you follow the rule of the First Order or join the Resistance in a secret plot? Strike a bargain with a gang of smugglers or sit back, sip a cocktail and watch it all from a safe distance?

The choice is yours. You are the hero of your very own Star Wars adventure—the most immersive Star Wars experience ever created!

Find complete information and book your trip for 2023 beginning September 1, 2022, at StarWarsGalacticStarcruiser.com.