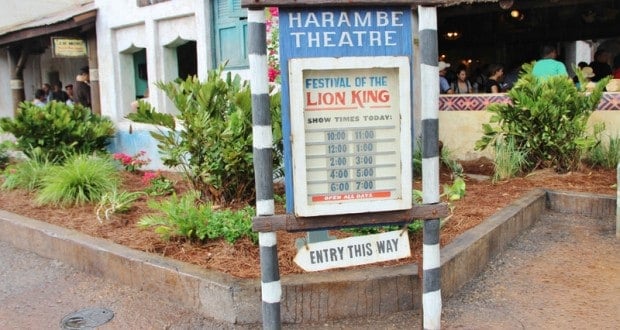 We love the new additions of Avatar Flight of Passage and Na’vi River Journey in Animal Kingdom’s newest land, Pandora – The World of Avatar. While we sing the praises of these new attractions, we can’t help but keep the Animal Kingdom “classic” attractions as our favorites! We hope these six stick around for a long, long time!

While I do believe that Kali River Rapids is a bit too short, and loses some of its charm due to the length of the ride, it is one of the best attractions in Animal Kingdom. Often overlooked by guests at this attraction are the queue and the theming of destroying the forest, and the importance of saving the environment. The queue for Kali River Rapids is very detailed and well themed, similar to how the queue of Expedition Everest is. The queue for this ride really sets the tone for the rest of the attraction, and tells the story of the importance of saving the forests.

I’ll admit, before I saw Finding Nemo: the Musical, I was extremely worried that I would not like it. The addition of original songs to a movie that did so well without being a musical worried me and I did not have high expectations for the show at all. I could not have been any more surprised after the first time I saw the show. I am actually in love with the music, and the set design is excellent as well. Even in Animal Kingdom’s relatively short history, Finding Nemo: the Musical is already the third production to take place in the Theater in the Wild, and I’m hoping that it never closes for something else.

4. Festival of the Lion King

The Festival of the Lion King, in my opinion, is the next best thing to seeing the Lion King on Broadway. This show combines some of the exciting elements of Broadway with classic Disney characters and song and dance. The show is also interactive for kids, and the audience as a whole, and I think it adds a nice fun atmosphere to Harambe Village.

While I’ll admit I’m not a huge fan of Dinoland as a whole, I do love the Dinosaur ride. I’m really not crazy about Chester and Hester’s Dino-rama, but I love the more scientific design of the Boneyard and the Dino Institute. The Dinosaur ride has so many great elements that are not often seen in one single attraction. This ride has an excellent preshow, and is well detailed while still serving as a thrill ride. This is one of my favorite attractions in Animal Kingdom, and I would absolutely hate to see it close.

I’m pretty sure that if Kilimanjaro Safaris were to close, the rest of Animal Kingdom would have to go down with it. Kilimanjaro is the flagship attraction of Animal Kingdom. It exemplifies the main points of the park, which promotes conservation and education about animals and the world around us. This attraction is probably the closest many guests to Walt Disney World will ever get to taking an actual African safari, and I honestly do not think the park would be able to function properly without it.