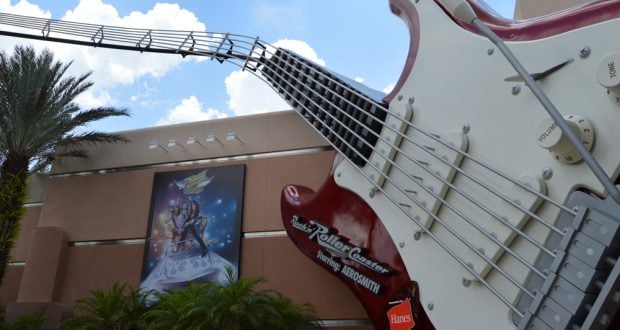 One of the most popular areas of Disney’s Hollywood Studios is Sunset Boulevard which brings the glory and beauty of old Hollywood to life through vintage cars, classic architecture, and softy playing jazz music. Guests who walk up and down Sunset Boulevard might spot a classic red trolley which is numbered 694. While the number may seem random, it actually pays tribute to June 1994 when Sunset Boulevard officially opened to the public.

At the end of Sunset Boulevard is the ominous Hollywood Tower Hotel which houses The Twilight Zone Tower of Terror. The attraction invites guests to star in their very own episode of the television series and enter into an abandoned service elevator where five guests mysteriously disappeared years ago. The Twilight Zone Tower of Terror is beautifully themed with many props and cobwebs creating the feeling that the Hollywood Tower Hotel was quickly abandoned years ago. While moving through the lobby portion of the queue, guests should be on the lookout for a pair of broken glasses which directly honor an episode of The Twilight Zone. The episode was titled “Time Enough at Last” and featured a man who found himself alone on Earth finally with enough time to read his books until he broke his glasses rendering him blind.

Next door to The Twilight Zone Tower of Terror is the Rock ‘n’ Roller Coaster Starring Aerosmith which invites guests into G Force Records where the band can be found recording their next hit. Before blasting off in super stretch limos to rocket across town to a concert, guests pass through an alley scene where they can watch other limos launching. Safety signs in the alley scene feature a line that pays tribute to the unique way that Elvis Presley spoke. Guests who read the final line of the safety signs which say “Thank you vera much” will surely recognize the iconic way that the king of rock and roll spoke.

One of the most popular attractions in all of Walt Disney World is Toy Story Mania which magically shrinks guests down to the size of toys and invites them to compete in a series of 3D midway games hosted by Woody, Buzz, and the gang. After boarding their attraction vehicles, guests momentarily pause in the loading area next to a massive board game before entering into the main portion of the experience. On the board game box is a larger than life barcode with a long string of numbers which at first glance seem totally random. The numbers actually represent the date December 15, 2006 which was the official announcement of Toy Story Mania.

Guests who are fans of the fictional Star Wars universe definitely need to experience Star Tours – The Adventure Continues in Disney’s Hollywood Studios. The attraction has guests board a Star Tours ship for what should be a routine fight before it is discovered that a Rebel Spy is on board. Featuring random 3D scenes and plenty of familiar characters, the attraction is one that can’t be missed. When moving through the queue area, guests should look for a blue tinted screen above which showcases the silhouettes of people and droids moving past on the other side. At one point R2D2 glides past wearing iconic Mickey ears.

There are plenty of amazing places to enjoy a meal in Disney’s Hollywood Studios including the full service location Mama Melrose’s Ristorante Italiano. The location combines classic Italian cuisine with unique and delicious twists and is decked out with a quirky and warm décor. In the reception area of the restaurant, guests can spot a Dalmatian figure which has a spot that forms a classic Hidden Mickey.

2016-07-03
Caitlin Kane
Previous: 6 Secrets Most People Don’t Know About Free Dining
Next: 9 Facts And Secrets About Mickey’s Not So Scary Halloween Party