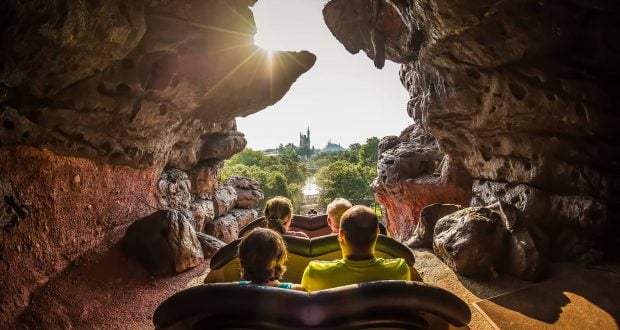 Whether you’re an adrenaline junky or a die-hard Disney movie fan, Splash Mountain has something for you.  It’s the perfect combination of thrill ride and immersive character-focused experience and is loved by adults and kids alike.  Of course the highlight of the attraction is the big drop, which you can watch from the path in Frontierland, but there is so much more to this ride that you can’t see from the outside!  Here are 8 totally cool things about Splash Mountain:

If you’ve spent any time at a Disney park, you know that they’re all about theming. You rarely find a ride that doesn’t have a theme or tell a story of some sort.  This is one of the reasons I love Disney!  And they’ve really found story-telling-ride-perfection with Splash Mountain.  For over ten minutes, you’re immersed in the world of Brer Rabbit, following him as he outwits the cunning Brer Fox and his sidekick Brer Bear.  Brer Rabbit is a likeable character who you can’t help but cheer for, and his audio animatronic home and friends harken back to a time when life was simpler than it is today.  I always leave this ride with a warm fuzzy feeling inside, even if I’m soaking wet on the outside!

2. The Story Behind The Story

You may know that Splash Mountain is based on the 1946 Disney movie Song of the South, a live-action animated film where Brer Rabbit, Brer Fox, and Brer Bear appear in animated form. But did you know that these characters actually originated in early oral African-American folklore?

While I wouldn’t say waiting for Splash Mountain is as fun as being on the ride itself, Disney has done a great job making a pleasant line experience for this ride that often has long wait times. The first section of the wait is outside, but there are some shady sections to offer relief on hot days.  And once you head inside, the dark tunnel-like paths and what must be air conditioning take over and make for a very pleasant waiting experience!  Catchy country-western tunes play in the background as you walk past old farm equipment and other props that start setting the scene for the story.  So if you’re short on fastpasses, having to wait in the Standby line for Splash Mountain is much more pleasant than the lines for some other rides, including its near-by sister mountain – Big Thunder.

Splash Mountain features not one, not two, but three catchy songs that most riders fall in love with. The friendly atmosphere of Brer Rabbit’s world is created in the first section of the ride with the song “How do you do?”, which then sets the scene for his decision to leave home for an adventure.  “Laughing Place” is extremely catchy and might get stuck in your head for the rest of the day, but it’s followed by the familiar “Zip-a-Dee-Do-Dah” which will take it’s place!

One of the best parts of Splash Mountain comes right before the big drop at the end. You’ll go up, up, up in your “log”, with vultures signaling your upcoming demise, and then BAM – you get an amazing view of the Magic Kingdom!!  It doesn’t last long, so make sure you drink it in while you can.  It’s especially beautiful at night!

So the drop might not be the only fun part of the ride, but let’s be honest – it is the highlight!! It’s a whopping 52.5 feet with a 45 degree angle, but it definitely feels like you’re going straight down!  With speeds up to 40mph, it’s the ultimate rush!  (52.5 feet not enough? Head to Tokyo where it’s 60 ft!)

The best part about the splash at the bottom of the big drop is that you never know exactly what you’re going to get! Don’t think you’re safe just because you’re in the back!  It all depends on the weight distribution in the boat, so you never know whether you’re going to escape with just a few drops or get totally soaked.

Your Splash Mountain experience doesn’t have to end when the ride does – it can live on through one of the coolest ride photos in the park. It’s pretty easy to spot the flash when you’re mid-drop, which means you can plan for it to get an especially fun picture!  And if you think of something really creative, you just might go viral on social media!