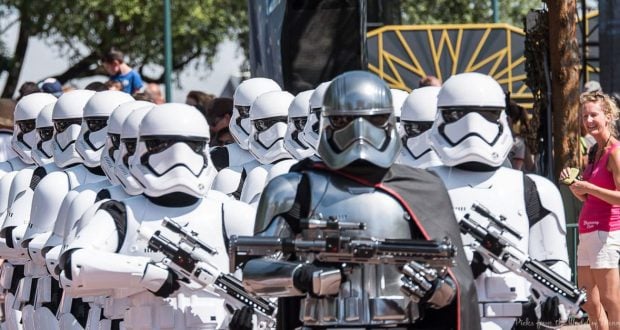 Ever since Disney bought Lucasfilm for $4 billion in 2012, fans of both empires have been excited about Disney’s take on that galaxy far, far away. And Disney wasted no time in producing and distributing new episodes of the Star Wars saga. Soon, even Disney World began to see the addition of new Star Wars-themed attractions and character encounters. And today, diehard Star Wars fans can get their out-of-this-galaxy fix in many different ways when they visit the Walt Disney World Resort. Here are 7 of them.

If you’re a fan of Star Wars and you like Avatar: Flight of Passage at Animal Kingdom, and Soarin’ Around the World and Test Track at EPCOT, you’ll want to experience Star Tours: The Adventure Continues at Hollywood Studios. Star Tours is a 3D simulated space flight that takes Guests to destinations made popular by the Star Wars saga. Put on your 3D glasses and find a seat aboard the StarSpeeder 1000. Then you’ll be instructed to buckle up while you wait for C-3PO to finish his work in the cockpit. But—oops—the agile C-3PO takes too long, and the doors to the StarSpeeder close, leaving C-3PO at the controls—and he’s not experienced with flying a ship like this one. Hold on tight as the StarSpeeder takes off—sometimes in reverse—and experience a fast flight with sudden drops, quick turns and near-misses with creatures of all kinds. This one-of-a-kind experience is fun for all ages!

You and the Star Wars fans in your family can meet Chewy and BB-8 at Hollywood Studios at Star Wars Launch Bay inside Animation Courtyard on the Light Side. They don’t sign autographs, but you can pose for pictures with both, and PhotoPass photographers are on hand to capture the magic! (Keep your eyes open for the First Order—they’ve been searching for BB-8!)

Meet this eery First Order warrior at Star Wars Launch Bay at Animation Courtyard (the Dark Side) at Hollywood Studios on the bridge of his ship. Kylo Ren doesn’t speak and sure doesn’t sign autographs, but he will stand in a photo with you—just don’t take too long. Fans or not, he doesn’t care too much for company!

This fun nighttime spectacular at Disney’s Hollywood Studios will have Star Wars fans cheering every evening! Relive iconic scenes from the Star Wars saga as projections, lighting effects, lasers and pyrotechnics come together to light up the Chinese theater and the night! Don’t miss it!

This exciting exhibit is perfect for any Star Wars fan who visits Disney World! See props and models from Star Wars: The Last Jedi. In addition to seeing props, you’ll be able to screen Star Wars videos, play games and more!

You’ve got to see this to believe it! Experience Star Wars: Secrets of the Empire by ILMXLAB and the VOID—a virtual reality attraction unlike any you’ve ever experienced! You and three others make up a team searching for intelligence desperately needed by the Rebellion—it’s vital to the Rebellion’s survival. Don’t worry—you’re disguised. But you’re in unfamiliar territory as our world is merged with the world of Star Wars through 3D imagery and sounds. Purchase tickets before you visit Disney Springs at www.thevoid.com.

The ultimate Disney World thrill is coming in August 29, 2019 for Star Wars fans of every age! A new Star Wars-themed land will open at Disney’s Hollywood Studios, and we couldn’t be more excited! The new 14-acre land will feature two attractions—one that will have fans boarding a Star Destroyer and another that will give Guests the chance to pilot the Millennium Falcon while completing a mission. Star Wars fans will also be able to purchase treasures from across the galaxy and even try new beverages like blue milk! August 29, 2019 can’t get here soon enough!