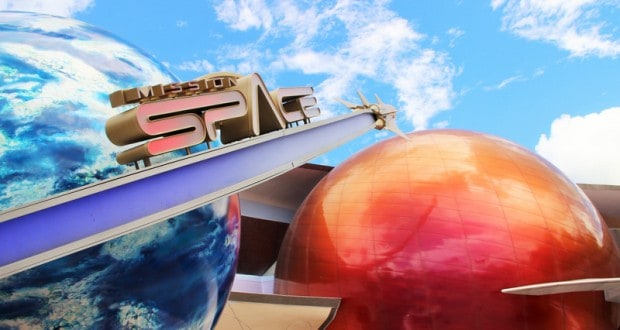 If you’re ready to blast off into space, piloting your own spacecraft and attempting a bumpy landing on Mars in six minutes, or if you’d rather orbit around the Earth, taking in breathtaking sights, then head over to RELAUNCHED Mission: SPACE!  Located in the Future World section of Epcot, Mission: SPACE appeals to space enthusiasts, adventure seekers, and guests of all ages.  Guests board a simulator and take the controls of the X-2 Deep Space Shuttle, with each person assigned a specific mission to accomplish during spaceflight. The countdown commences and a launch is simulated, complete with a feeling of weightlessness and G forces. If that sounds exciting to you, the fun is just starting! Here are a few other great reasons why guests will love RELAUNCHED Mission: SPACE!

Everyone wonders what it would feel like to actually launch into space. Walt Disney Imagineering developed this attraction with astronauts, scientists, and NASA advisors to create the most authentic experience possible. The result was the first ride system to allow guests to feel simulated space flight using the most advanced technology. Originally open to guests in 2003, the ride was revamped to include the tamer Green Mission. Another reboot came in 2017 that introduced the new orbit around the Earth (Green Mission) and an updated mission to Mars (Orange Mission).

It’s hard not to think of NASA and past space explorers as you enter this attraction. I love checking out the early missions to the moon by the United States and the Soviet Union indicated on the moon sphere in the Planetary Plaza. Look up to view the hanging Lunar Rover in the Sim Lab, on loan from the Smithsonian. Don’t forget to check out the displayed quotes by distinguished astronauts and astronomers, lending further inspiration to the thrilling mission awaiting you. Walt Disney Imagineering continuously ensures Mission: SPACE is authentic as possible and uses former NASA astronauts as consultants. It’s cool to imagine the possibilities of future space exploration!

The technology and physics behind this ride are very impressive, and much of the technology was created exclusively for it. Human centrifuges were built to create more than 2 G-forces and continuous spinning motions, producing the feeling of weightlessness and acceleration. Virtual reality training simulators complete the experience of space launch and flight, along with a few unexpected surprises. The Green Mission version of the attraction doesn’t include the spinning technology, but the simulator does still move around and creates a realistic ride. On The Orange Mission, an actual mission to Mars is within the realm of possibility, and the propulsion technology used to explain the simulated ride experience to the red planet might very well be used in the near future by astronauts.

Pick the Green Mission if you want a less intense version of this attraction that features a thrilling orbit around the Earth. If you’re up for the more intense Orange Mission path, get ready for a launch to Mars, feeling the force of a real lift-off and acceleration into space. I have experienced both the Orange and Green missions, and they are equally exciting! Try them both, but be sure to check out the health and height restrictions for Orange Mission before you go.

After your mission is complete, head over to the Advanced Training Lab for space-inspired games. Don’t want to go on the attraction? You can enter the building to just play the games too.

Look for the rotating gravity wheel when you step inside the building. In the center is the logo for Horizons, a former Future World attraction many Walt Disney World fans remember fondly. Horizons stood where Mission: SPACE currently is located, closing in 1999. Guests got the chance to experience futuristic versions of life in space, deserts, cities, and under the ocean, then pick their own ending to the ride.

After you’ve completed your mission, stop in the gift shop and pick up a package of astronaut ice cream for a very unique snack. Available in several flavors, this freeze-dried treat was originally developed for early Apollo missions. I have to buy some of this ice cream on every trip!

Have an out-of-this-world dining experience in the near future! Disney is working to open an impressive table-service restaurant next to Mission: SPACE with amazing simulated views that will make guests feel like they are eating in space. While we don’t know an open date for this restaurant yet, we do know the name of the EPCOT restaurant is Space 220!