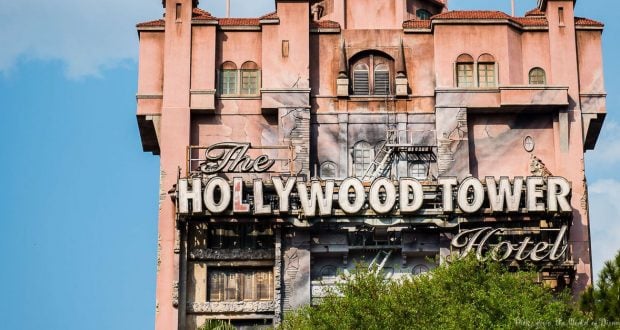 Disney’s Hollywood Studios is an amazing theme park that many guests love to spend plenty of time in while visiting Walt Disney World. The park invites guests into to feel like stars and experience their very own adventures featuring both classic Hollywood and television characters and moments. Guests who spend time in Disney’s Hollywood Studios can enjoy playing with the Toy Story characters, joining the Rebel Alliance in the Star Wars universe, entering directly into some of the most classic Hollywood films of all time, and even entering into a beloved television series. The classic television series The Twilight Zone is brought to life through a very popular attraction at the end of Sunset Boulevard. The Twilight Zone Tower of Terror invites guests into the abandoned Hollywood Tower Hotel where five guests mysteriously disappeared years ago after their elevator was struck by lightning. Guests soon find themselves on board a service elevator heading for the same fate in The Twilight Zone, allowing them to feel like stars in their very own episodes. While The Twilight Zone Tower of Terror is very popular with guests for its thrilling random drop sequence while in the elevator, it is also home to an amazing level of detail that helps to bring the story to life. From nods to the television series to eerie details, there are some great things for guests to notice. Here are eight totally cool things about The Twilight Zone Tower of Terror.

After entering into the queue for The Twilight Zone Tower of Terror, guests move through a series of gardens that feature ominous fog, softly playing jazz, and overgrown greenery. As guests approach the entrance to the lobby, they can spot a cornerstone that references the year that the Hollywood Tower Hotel was built. The cornerstone reads 1917, giving guests the framework of the era of old Hollywood that they are about to enter. The story of The Twilight Zone Tower of Terror takes place in the 1930s, leaving enough time for the Hollywood Tower Hotel to have been open for some time and become famous before that infamous night.

Once inside the lobby, there are so many details that immediately immerse guests in the experience. Just to the right of the doors into the lobby is a small desk with many details covered in cobwebs. One item on the table is a pair of broken glasses which refer to The Twilight Zone episode “Time Enough At Last.” In the episode, the main character survives a nuclear fallout and finds himself finally with all the time needed to read his favorite books. Unfortunately, he quickly breaks his glasses leaving him alone and blind in the world.

Near the front desk are many amazing details that help to make the Hollywood Tower Hotel seem like an authentic hotel that was abandoned in a rush. There are mailboxes with letters long since left behind, and even a sign in book. Guests who look behind the desk will notice a prestigious certificate indicating that the Hollywood Tower Hotel was awarded the 13 Diamond Award from AAA. This seems remarkable until guests realize that the real award only reaches 5 Diamonds.

Once inside the library of the Hollywood Tower Hotel guests begin to watch a short preshow film that describes to them the events that happened on that fateful night. As with any The Twilight Zone episode, the narrator for the experience is Rod Serling. Unfortunately, Serling passed away before The Twilight Zone Tower of Terror was a reality, so Imagineers had to get creative to find a solution. The Imagineers combined preexisting footage and narration by Serling with addition narration by a voice actor to create the seamless introduction that guests hear. In addition, Imagineers also edited out the cigarette that was ever present in Serling’s hand during each episode.

During the preshow, guests can see firsthand the five guests who boarded the elevator only to be struck by lightning and trapped inside The Twilight Zone. Two of the individuals are a small girl and her nanny who board the elevator on the right hand side of the screen. Guests who look closely will notice that the little girl is holding a vintage Mickey doll from the 1930s! The doll can be seen again when a ghostly image of the little girl appears again during the attraction.

After finishing the preshow, guests move into the boiler room of the Hollywood Tower Hotel where the service elevators are waiting to bring them to their own eerie experience. At one point in the boiler room, the queue line splits giving guests the option to go left or right to two separate loading areas. Guests who look at the wall to the left of the split will notice a dark stain that forms a classic Hidden Mickey in the bricks!

Just before boarding their elevators, guests should pay attention to the Cast Members, or bellhops, who work at the attraction. Many of them are very dedicated to their role and love to help create a spooky and enjoyable experience for guests. Those who look closely might notice that some Cast Members have different details on their jackets than others. Those who have ornate gold epaulets on the shoulders of their jackets have worked at The Twilight Zone Tower of Terror since it officially opened in 1994!

Once onboard the elevator, guests should check out the inspection certificate hanging next to the doors. The certificate is last dated on October 31, 1939 the night that the fateful lightning strike occurred. The man who signed the certificate is Cadwallader who played the devil himself in The Twilight Zone episode “Escape Clause.” An addition detail that fans of the television show will appreciate is that the certificate’s number is 10259 which references the very first airing of an episode of the hit series on October 2, 1959.