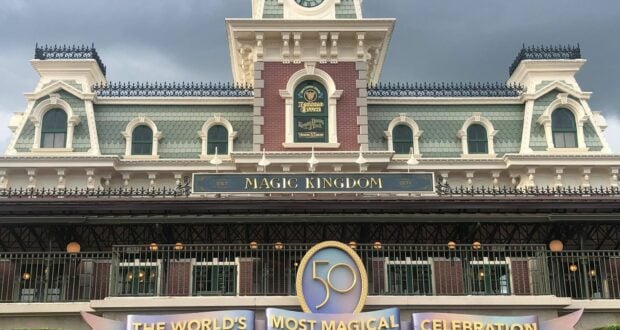 We think it’s safe to say that we are all getting such enjoyment out of the many Walt Disney World’s 50th Anniversary additions in the Parks.

Whether it’s the new Beacons of Magic on the Hollywood Tower Hotel at Disney’s Hollywood Studios, KiteTails at the Discovery River Theater at Disney’s Animal Kingdom, or the golden Fab 50 Disney character statues placed throughout EPCOT and the Magic Kingdom, there’s so much on offer for Guests at Disney World during its 50th celebration.

But we have amazing news for Guests heading to the Walt Disney World Resort on their Disney vacation! Now you can find a delicious new 50th Anniversary display, with a delicious twist.

If you have a sweet tooth and happen to be visiting Walt Disney World’s Magic Kingdom, then you may want to stop over by the Main Street Confectionery on Main Street U.S.A. 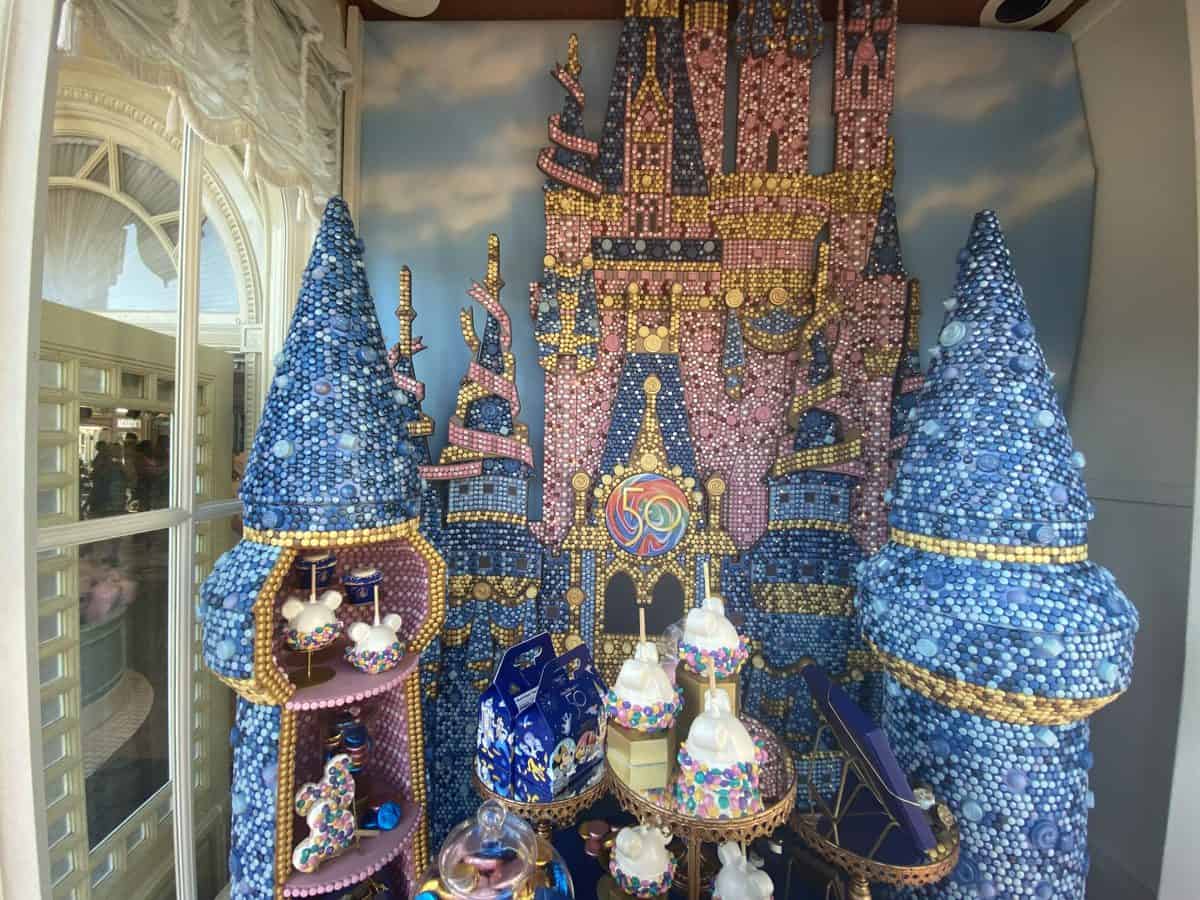 The sweetest candy shop on Earth now has an incredible 50th Anniversary Cinderella Castle display in the front window that is entirely made out of candy. This incredibly mouth-watering display appears to be made up of blue, pink, and gold candy pearls, M&M’s, lollipops, and more.

One cool addition to the awesome 50th Anniversary castle display is the two front castle spires, which actually rotate, so Guests can see some of the delectable treats that are offered for sale inside Main Street Confectionery. The castle sits against a sky-blue background and there is a 50th Anniversary Medallion sitting in the center that looks like a large lollipop. Sharp-eyed visitors may be able to spy some Hidden Mickeys in the castle display as well.

Frequent Disney Park Guests may remember that the Main Street Confectionery has recently gone through a major refurbishment from March 29 through September 29, 2021. During this refurbishment, Mars Candies became the major sponsor of the confectionery. So you can now find lots of Mars snacks, including a wall of brightly colored treats for you to choose from while mixing and matching your favorites. 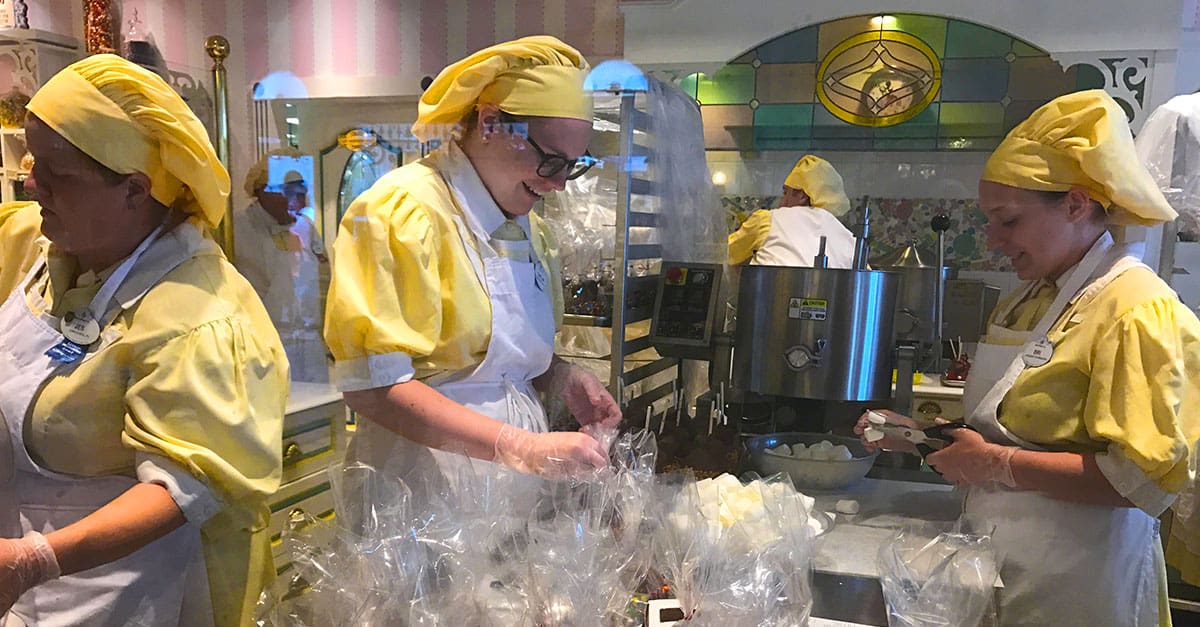 While visiting the Main Street Confectionery you can watch fresh cotton candy being made and Guests can peek through a window to watch Cast Members as they are making some of the sweet treats they offer for sale.

Guests will also find lots of pre-packaged candies and freshly made treats like candy apples and Mickey and Minnie Rice Krispy Treats. 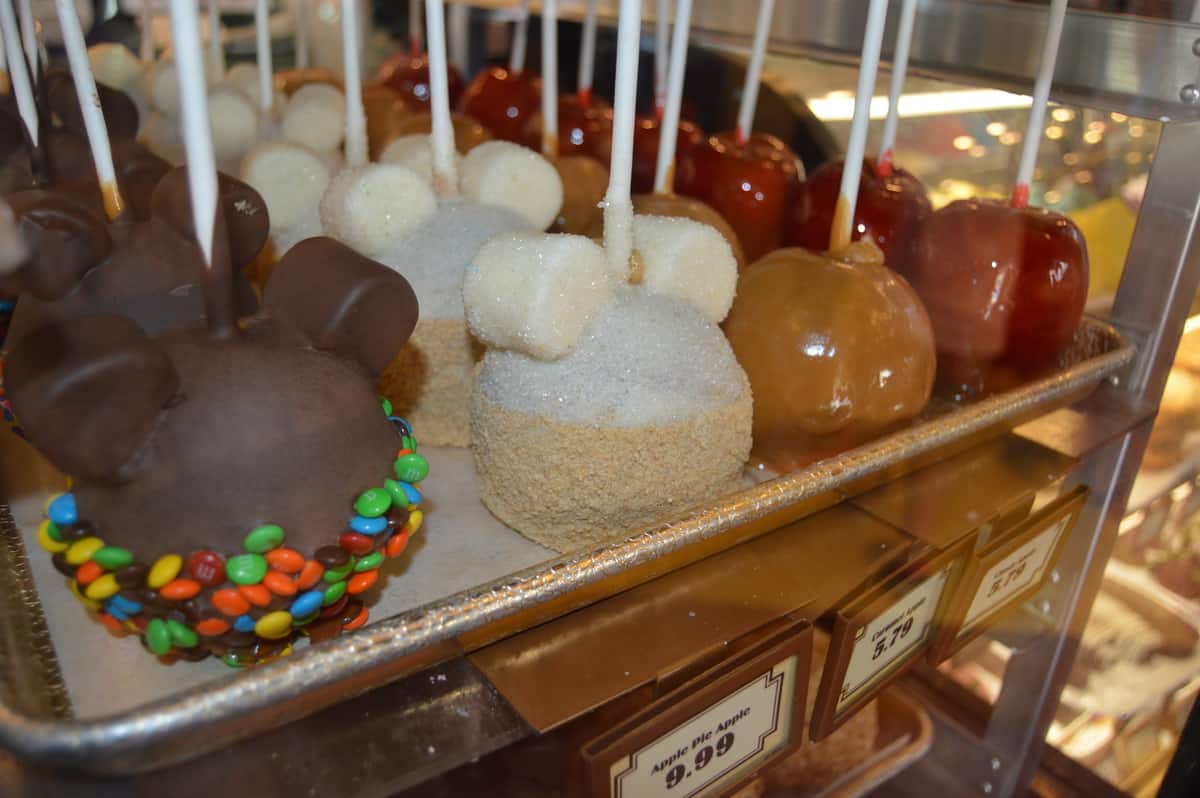 The Main Street Confectionery is definitely what Walt Disney was thinking about when he said, “Adults are only kids grown up.” Walking through this fabulously smelling store definitely makes us feel like a kid again!