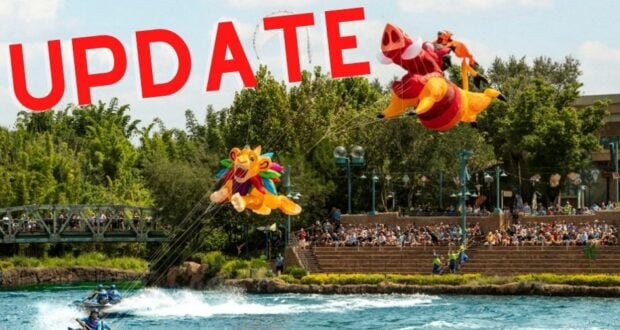 The entertaining day show at Disney’s Animal Kingdom Park known as “Disney KiteTails” will be experience changes in the near future.

As Walt Disney World Resort makes the most of its 50th Anniversary celebration new Disney experiences have launched including “Disney Enchantment” at Magic Kingdom Park, “Harmonious” at EPCOT, and the daytime show, “Disney KiteTails” at Disney’s Animal Kingdom.

With the permanent closure of Rivers of Light at Disney’s Animal Kingdom, the Discovery River Lagoon was eerily quiet until Disney introduce “Disney KiteTails” into the mix!

The kite show has been one of mixed reviews as the bright and vibrant kites fly overhead. To land, the kites make random crash landings that are almost painful to watch, leaving Disney fans intrigued by the unexpected Disney show.

As Spring offers Earth Month festivities at Disney’s Animal Kingdom and we expect the return of “A Celebration of Festival of the Lion King” Tumble Monkeys soon, Disney is revealing changes for the Disney KiteTails show coming soon.

Disney has announced, “Just in time for summer fun, we’re shifting the focus of the show so Guests will be able to experience “Disney KiteTails” from anywhere around the Discovery River Lagoon, with shorter and more frequent performances throughout the day.”

“Between “Disney KiteTails” performances, Discovery River will come alive with our Character Flotillas! Setting sail in succession, these high-energy boats will fill the waters throughout the Park with music, EARidescent 50th anniversary moments, and characters including Mickey and friends, Timon, Rafiki, and Pocahontas several times each day. You won’t want to miss it!”

If you have yet to experience Disney KiteTails, the experience boasts, “Taking Magic to New Heights”:

Hearts and imaginations will soar as larger-than-life kites and colorful props dance through the air to the beat of beloved Disney songs. Enjoy 2 unique shows, each themed to a beloved Disney animated classic:

We will be sure to share the Disney KiteTails future schedule as soon as Disney releases it.