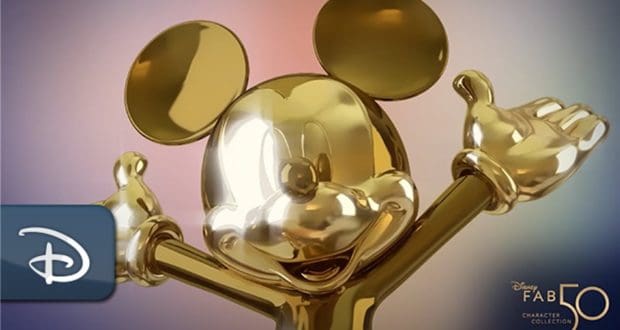 Behind The Scenes Look at Disney’s “Fab 50” Character Sculptures

Over the past several weeks Walt Disney World has been revealing the Disney characters included in the “Disney Fab 50 Character Collection.” Disney cast members, legends and celebrities have all had a part in revealing the 30 plus characters that have been revealed out of the 50 so far. Soon enough we’ll be able to visit Walt Disney World’s four parks and search for these characters in scavenger hunt form as we “collect” each golden Disney character sculpture on Instagram. The excitement begins on October 1 when “The World’s Most Magical Celebration” kicks off in honor of Walt Disney World’s 50th Anniversary. And now, Disney is giving us a behind-the-scenes look at the “Fab 50” sculpture work in progress!

First, in case you’ve missed any, the lineup of Disney characters included in the “Fab 50” sculptures so far include:

Disney continues by saying, “All of us behind these “Disney Fab 50 Character Collection” reveals thank you for joining us for this virtual “E-ticket” ride across the company, and we look forward to seeing social feeds filled with your own photos of these stunning sculptures at Walt Disney World Resort during “The World’s Most Magical Celebration!”

Are you making plans to be on the hunt for the Fab 50 characters beginning October 1? We’re so looking forward to it and will continue to share the remaining characters as soon as Disney reveals them!