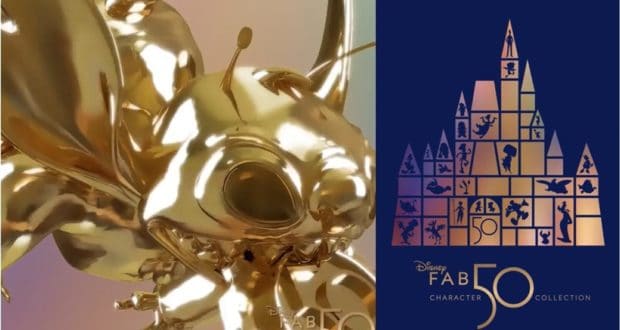 We keep counting down the days to “The World’s Most Magical Celebration“ which means Disney keeps counting down the “Disney Fab 50” sculptures! As we prepare to celebrate 50 years of magic-making at Walt Disney World, Disney is keeping us on our toes with exciting new experiences and entertainment on the way, lasting through the 18-month long celebration. Two new nighttime spectaculars including “Disney Enchantment” at Magic Kingdom and “Harmonious” at EPCOT are making their debut, Disney’s 50th merchandise is just stunning, and there’s so much more that it’s almost hard to keep up with it all! We are especially excited to experience Disney Fab 50 sculptures that will be available throughout Walt Disney World’s four theme parks. Several favorite Disney characters have been revealed so far, and now Disney has revealed the latest characters to add to the list… everyone’s favorite blue alien!

As the Castle slots (shown in the image above) continue to slowly but surely fill in, Disney has announced #27 in the “Fab 50” character lineup! Disney Aulani took to Instagram to share: “Aloha! Alyssa-Lende E Kane, our Aulani Ambassador, has revealed that Stitch is part of the “Disney Fab 50 Character Collection” that you’ll soon find across the four @waltdisneyworld theme parks during “The World’s Most Magical Celebration” starting October 1 #DisneyWorld50″

We’re thrilled to see the lovable stinker Stitch has joined the list! You’ll be able to find Stitch at Magic Kingdom Park. Here’s the lineup of Disney characters included in the “Fab 50” sculptures thus far:

There you have it! We are a little over halfway there. Which Disney characters are you hoping to see added to the “Disney Fab 50” lineup? We’ll keep sharing the news about which characters are included as Disney keeps the Fab 50 countdown going!