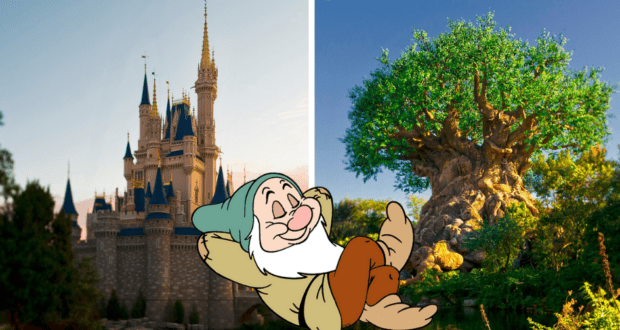 We love Walt Disney World and all of the fun and magic that comes along with it, don’t we? But we’d be lying to ourselves if we didn’t admit that it can be absolutely exhausting. Combine early alarms, ambitious rope drop destinations, trying to beat the Florida heat and humidity, and walking an average of 7-10 miles every day and you’ve got yourself the perfect recipe for a nap. 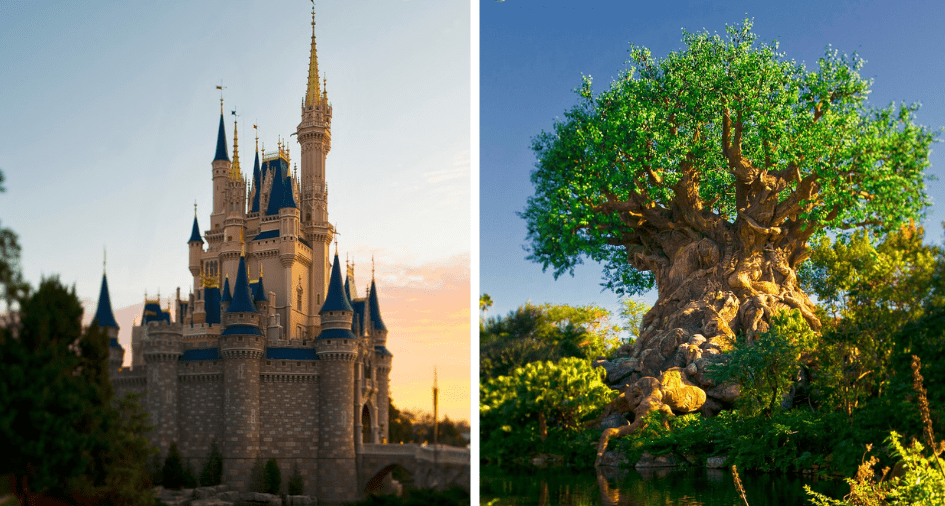 However, when it comes to taking [much needed] breaks during Disney Park days, there needs to be some strategy involved. If you’re party is vacationing at Walt Disney World for more than a few days, it’s not a bad idea to schedule in a rest day where you can sleep in, take advantage of the Resort pools, and give your body a much deserved day to relax. But when it’s a Park day, trying to go back to your hotel to take a break will really eat into your day, especially if you decided to stay off property.

So what can you do to take breaks without sacrificing precious Park time and magical experiences? Depending on what park you’re visiting, we’ve got some suggestions. Part 1 covers great break spots in Magic Kingdom and Disney’s Animal Kingdom – stay tuned for part 2 in EPCOT and Disney’s Hollywood Studios!

Tomorrowland Transit Authority PeopleMover (16 minutes)
Honestly, this relaxing ride feels longer than it is. And if one round isn’t enough for you, the line moves pretty quickly so it’s usually easy to turn around and get right back on. The PeopleMover is a great opportunity to sit and relax, while also being in motion. It’s also great for people watching, not just people moving. 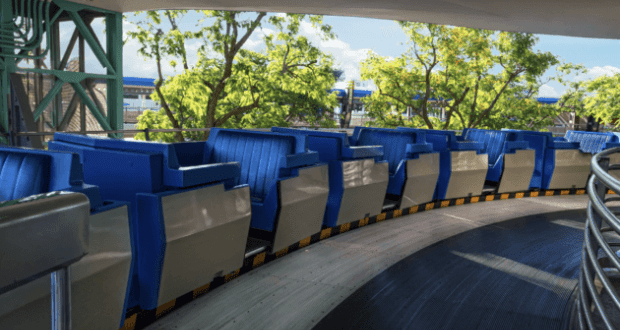 Country Bear Jamboree (17 minutes)
While this show is only about 17 minutes long, it’s another opportunity to sit in the beloved air conditioning. The show is one of the last attractions that Walt Disney helped develop and there are rumors it’s getting a face lift – so catch the original while you can.

The Carousel of Progress (21 minutes)
While there’s a pretty popular opinion that the Carousel of Progress could use some updates, it’s still a classic attraction worth visiting. It lasts approximately 21 minutes and is another great spot to rest your legs and cool off. Just don’t be surprised if you get “There’s a Great Big Beautiful Tomorrow” stuck in your head. 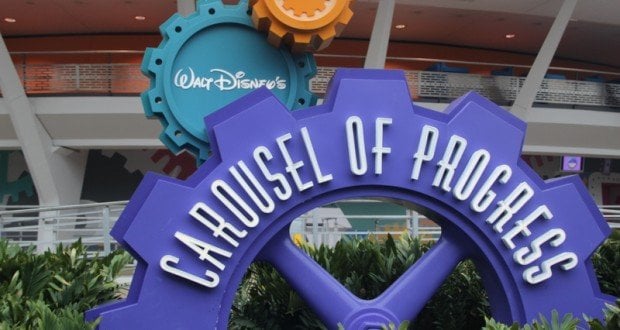 Walt Disney World Railroad (20 minutes)
While the train has been closed during the construction of TRON, once it’s back up and running, it’s a great attraction for an interactive rest. Like the people mover, you get to sit and feel the breeze, while also moving around the park. You have the option to exit the train at more than one stop, but it’s nice to stay on for the whole loop.

Finding Nemo the Big Blue… And Beyond! (25 minutes)
Recently updated, this puppet show and musical is no longer an abbreviated version of the movie, but takes a new spin with the same characters. The only downside, at least from the rest perspective, is that the changes include scraping off 15 minutes from a 40 minute show to a 25 minute show. Regardless, it’s still a great spot to take a breather in Animal Kingdom. 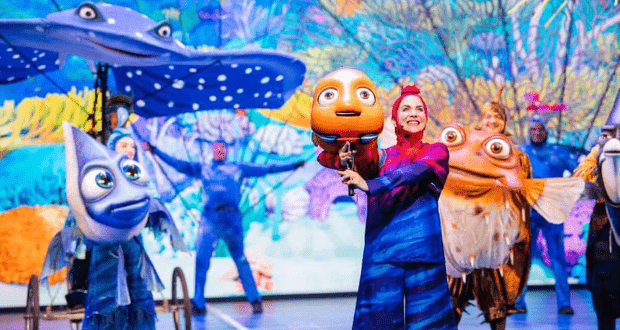 Feathered Friends in Flight (35 minutes)
Located in the Asia section of Animal Kingdom, this show will captivate you the entire time. While it’s not a great spot to rest your eyes, you still get 35 minutes to sit in the shade, and that’s a great break! Sitting up front allows you to see more birds up close and personal. If you’re not a huge fan of flying friends, sitting in the back bleachers provides a decent buffer zone from all the action. While it’s not guaranteed that a bird or two won’t decide to pay those areas a visit, you’ll likely feel more comfortable with the added space between you and the stage.

The Boneyard
This probably isn’t a resting spot for kids, there’s too much to see and do! But parents of children who don’t need to be accompanied while they explore The Boneyard can catch a break at the dig site. While it’s not indoors, there is plenty of seating in shade where large fans also help to cool you down. Best part? There’s no time limit! 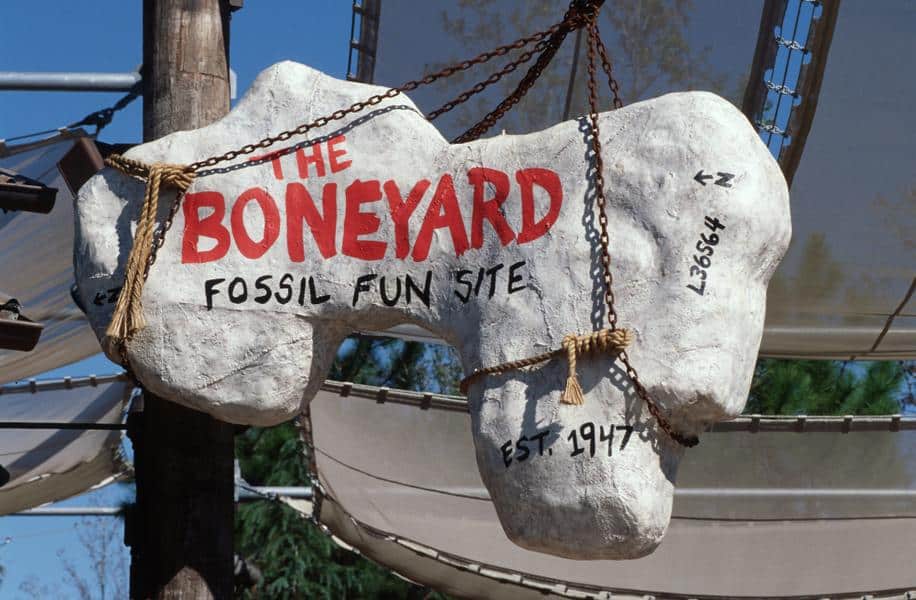 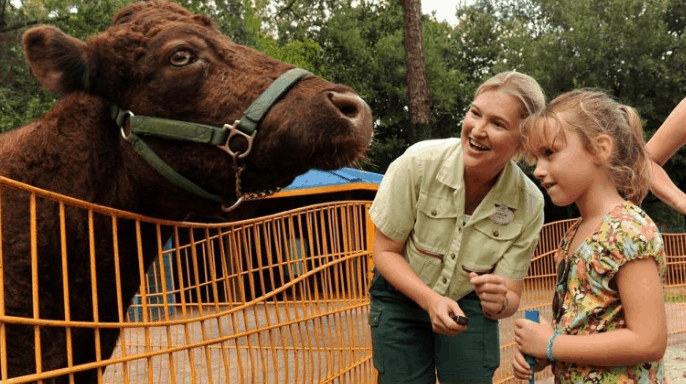 Next time you’re at Magic Kingdom or Animal Kingdom, tempted to head back to the hotel for a rest, consider these break spots instead! Give your body a break then get back out there and make those memories!