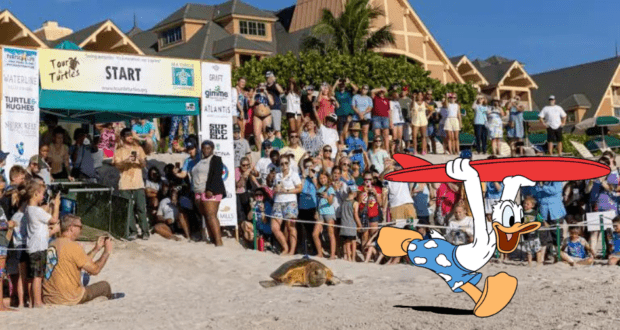 Bet You Didn’t Know About This Annual Disney Tradition!

Tour de Turtles is an inspiring race that allows people to monitor sea turtles online, in order to see which one travels farthest over the course of three months. This year two female sea turtles named Neytiri and Ronal were released into the ocean after tracking devices were installed on their shells.

The sea turtles were named after characters from Avatar: The Way of Water (2022), the highly anticipated sequel to Avatar (2009). They joined the race alongside other, various sea turtles. Disney Conservation Team Wildlife and the Sea Turtle Conservancy have been working together for fifteen years on the program. During that time, they’ve tracked and studied twenty-six different sea turtles as they migrated through the ocean.
The event was open to both Disney Guests and the public, as people lined up to watch the turtles be released. The audience applauded as they entered the water, getting their devices ready to start tracking. The area around Disney’s Vero Beach Resort in Southeast Florida is one of the most crucial sea turtle nesting habitats on the earth. The data collected during Tour de Turtles enables conservationists to make important decisions about their methods to help the majestic creatures.

Sea turtles face many dangers in the wild, especially when it comes to their hatchlings. The team’s efforts help ensure that Disney’s Vero Beach Resort is a safe place for nesting sea turtles. Now that’s a heartwarming story, and one I bet you didn’t know existed!