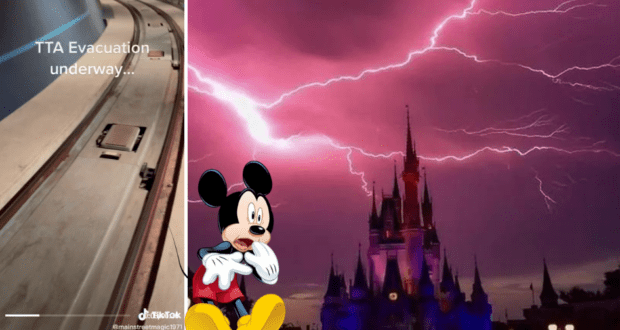 TikTok creator @mainstreetmagic1971 shared a video from the Tomorrowland Transit Authority PeopleMover, a 10-minute attraction that tours Tomorrowland. They documented the situation in real-time, updating their followers as events unfolded. In the first video, the sky is dark, and thunder can be heard in the background as the TikToker writes, “Currently stuck on TTA during a thunderstorm.” Guests aboard the attraction are seen waiting as they listen to upbeat music onboard the PeopleMover.
In the second video, the TikTokers update their experience, alerting followers that the storm has “Escalated to torrential downpour and evacuation coming.” Rain can be seen and heard as it falls in sheets upon Walt Disney World Resort!

The last video alerts us that a TTA evacuation is underway and shows Guests abandoning their vehicles and exiting the ride along the tracks. The camera pans out to the Parks where an abundance of rain and lightning can be seen, with the grounds of Magic Kingdom Park thoroughly saturated with water.

In a similar video, posted on TikTok by dvc_park_hoppers, we see a more intense situation unfold on the Kilimanjaro Safaris tour at Disney’s Animal Kingdom Theme Park. Guests maintained positive attitudes during the situation, which was anything but ideal!

In the video, the rain is completely out of control, with winds gusting violently and Guests ducking and holding on for dear life! Screams can be heard, with one Guest yelling, “Best ride ever,” as other Guests laugh in amusement!
Although the weather in Florida can often be inconvenient for Guests at Walt Disney World Resort, it’s good to see that everyone seemed to keep their sense of humor intact during the thunderstorm!
2022-08-03
Christy Weinberg