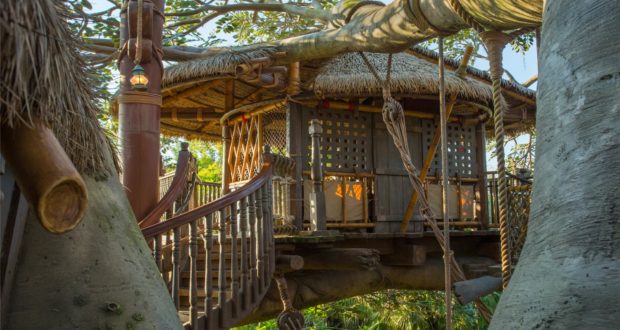 You may have put your sleepover days far behind you, but have you ever wondered what it would be like to have a sleepover at Walt Disney World?  Sure, Disney’s Value Resorts, Moderate Resorts, and Deluxe Resorts offer fabulous accommodations with, well, actual beds.

But there would be something indescribably magical about camping out at your favorite Disney theme park attraction once all the other Guests had left the Park.  Here are a few Walt Disney World rides we wish could camp out at.

Guests sometimes overlook Swiss Family Treehouse when visiting Walt Disney World’s Magic Kingdom Theme Park.  But I have to admit, I find it just as charming now as I did during my very first visit to the most magical place on Earth.  And is there a more perfect spot for an overnight adventure in WDW?  Doubtful.

360-degree views of the Park, rustic hand-crafted stairs and bridges, and a labyrinth of open-air rooms filled with delightful 19th-century curios await intrepid glampers at Swiss Family Treehouse.  If, like me, you wished for a treehouse as a kid, spending the night here would be a dream come true!

This one’s a no-brainer.  A sleepover on the African savannah?  Yes, please!  Kilimanjaro Safaris at Disney’s Animal Kingdom theme park is one of our favorite spots on property, and we think only one thing would make it better: setting up camp here for the night.

The Harambe Wildlife Reserve boasts a vast 110 acres, so there would be plenty of places to make camp.  Because many of the 34 species living here are nocturnal, Guests would even be able to see animals that aren’t typically active when riding the attraction during the day.  (Just watch out for those lions.)

If the Hollywood Tower Hotel were a real place, rather than the basis for a popular attraction in Disney’s Hollywood Studios, it would be the kind of place you’d dare your friends to spend the night in.  We can’t think of a spookier place for a Walt Disney World sleepover than The Twilight Zone Tower of Terror!

The only question is: where would you set up your sleeping bag?  In the dusty library, with its collection of antiques and television playing nothing but The Twilight Zone?  Or maybe in the overgrown, but clearly formerly gorgeous, gardens?

Perhaps the now-abandoned hotel lobby, covered in carefully curated spiderwebs?  Maybe the spooky boiler room in the basement?  Or would you be brave enough to camp out in the famous haunted elevator itself?  Sweet dreams…

The Seas with Nemo and Friends Pavilion

There would be endless fun in store during a sleepover at The Seas with Nemo and Friends Pavilion in World Nature at Disney’s EPCOT Theme Park.

With its gigantic (5.7-million-gallon) aquarium hosting a variety of sea-life from manatees to clownfish, there would be plenty of places to set up your sleeping bag and let the relaxing under-the-sea world lull you to sleep.  Dibs on the dolphin tank!

Na’vi River Journey would be a beautiful place to set up camp, and watch Pandora’s whimsical wildlife go about its nocturnal business around you.  And if the lapping water of the river didn’t send you off to dreamland, the soothing sounds of exotic, bioluminescent rainforest life sure would.

There’s nothing like a secret island, accessible only by log raft, for a sleepover!  By day, Tom Sawyer Island in Frontierland in Disney’s Magic Kingdom theme park is a fabulous little escape from the chaos of the Park.

It’s full of fun suspension bridges, mysterious caves, secret passageways, an old fort, and plenty of opportunities for Guests of all ages to run around and climb to their hearts’ content.

By night, we can only imagine that Tom Sawyer Island would be even better!  Camping out here would be the ultimate adventure – though you’d probably want to have a flashlight on hand to navigate the rustic, winding paths.

I know more than one Star Wars fan who would sell their firstborn for a night in the Millennium Falcon.  It’s a safe bet that Guests would jump at the chance to set up a sleeping bag in one of the most famous spaceships in cinematic history.

In fact, we think all of Star Wars: Galaxy’s Edge in Disney’s Hollywood Studios would be thrilling to camp out at.  Curling up in a sleeping bag with some Blue Milk, nighttime lightsaber battles with your family, a Chewbacca sighting or two – that’s the stuff dreams are made of!

What Guest at Walt Disney World wouldn’t love to end their day in the theme parks with a sleepover in a beloved attraction?  While this likely isn’t in the cards anytime soon, there’s nothing to stop us from imagining what it would be like!

Disney’s Magic Kingdom, EPCOT, Hollywood Studios, and Animal Kingdom theme parks are wonderful places to let your imagination run free.  After all, as Walt Disney himself said, “If you can dream it, you can do it”!  (So….maybe there’s hope for that WDW sleepover after all?)