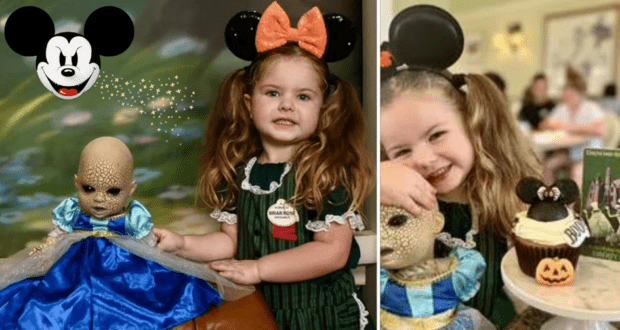 Get ready because you’ve never heard a Disney story quite like this one! People magazine reports that a Florida family recently went viral due to a bizarre tale about their trip to Walt Disney World Resort.

Brittany Beard has an adorable 3-year-old daughter named Briar, sharing a similar name to Sleeping Beauty’s (1959) Briar Rose. The toddler owns a creepy doll that her mom picked up for her at the Spirit Halloween store. 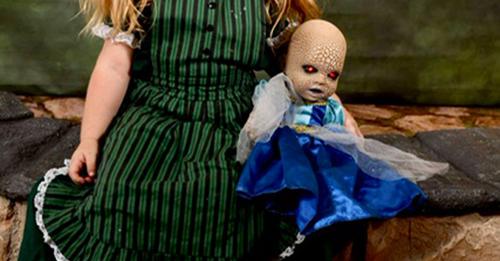 Briar insisted on having the doll when she saw it, sharing her reasoning in an adorable response, “But I’m its mommy, and it needs me.” Although the child named the doll Chloe, her mother nicknamed her Creepy Chloe, which seemed more fitting.

The family planned a trip to Magic Kingdom, and Briar asked if she could bring along her doll. Beard found the toddler’s Haunted Mansion dress, thinking it would be the perfect compliment to Creepy Chloe. As they went about their day, the doll ended up securing multiple Magical Moments for the family. For those who don’t know, Disney Parks sometimes bestows Magical Moments on unknowing visitors of its Resorts.

Cast Members may pull a Guest aside and give them any number of special offerings they didn’t expect. While it is not kosher to request a Magical Moment at Disney Parks, you may unknowingly catch a Cast Member’s eye, becoming a recipient of a very memorable experience.

Such was the case for Briar and her family when Cast Members spotted the little girl and her doll. Among the surprises they received was a visit from the Grand Floridian Cafe’s pastry chef, who brought Briar spooky treats. The toddler and her doll also enjoyed a special photo shoot later in the day. When the family entered the Haunted Mansion attraction, which had nearly an hour wait time, they were taken to the ride’s secret ‘Servants Quarters’ before entering the iconic stretching room.

But that’s not all! The family then received official Haunted Mansion Caretaker Certificates as Cast Members escorted them onto the ride. Talk about a Magical Moment; it’s not often you hear of Disney Parks Guests receiving the elusive offerings, much less multiples of them.

What a spectacular day for a little girl whose only request was to be the mommy of a creepy little doll named Chloe!