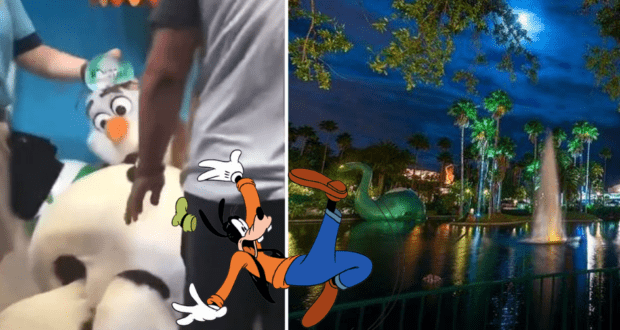 A video on TikTok displays a head-scratching interaction at a popular Walt Disney World meet-and-greet. Frozen (2013) fans interested in hobnobbing with the beloved snowman from the film can meet Olaf at Disney’s Hollywood Studios.

The character interaction is located in Echo Lake, a themed land donning a small, oval-shaped lagoon. Guests can check the My Disney Experience App or Walt Disney’s official website for a list of available times. A TikTok video posted by @_disney._stuff_ shows the interaction gone sour. A male Disney Guest can be seen suddenly grabbing Olaf’s carrot nose on his way out of the meet-and-greet.

The snowman’s arms go up to try and steady himself, but it’s no use. The extensively costumed character falls backward and literally doesn’t move! It was quite an alarming sight to see no bodily motion whatsoever.

It looked like the poor fellow had passed away. Amusingly, right after the incident occurs, a Cast Member abruptly bursts onto the scene with a loud booming voice. She directs the group out of the experience, and the video closes.

It’s unclear whether or not the Disney Guest pushed the character or was just playfully touching his nose. Whatever the case, Olaf did not seem amused by the interaction.

For Guests who love the Frozen films, Anna and Elsa are available for meet-and-greets at Royal Sommerhus in World Showcase at EPCOT. Fans can also catch a themed performance called ‘For the First Time in Forever: A Frozen Sing-Along Celebration.’ The show is located in Echo Lake along with Olaf’s meet-and-greet and features a “heartwarming celebration of Frozen with a flurry of stories, songs, and special guests.”

And don’t forget to visit the most epic Frozen-themed experience of all! Catch Olaf and Arendelle’s princesses in the Frozen Ever After attraction, also located in World Showcase, at EPCOT.

The stunning water ride is a treat for fans of the beloved films! We hope Olaf was okay after he hit the ground in this unideal Walt Disney World interaction.