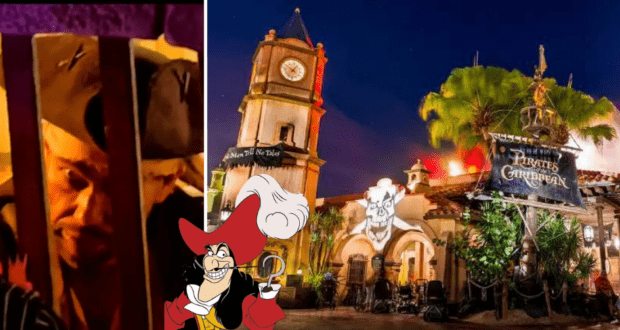 Is This Disney Cast Member In Character or Did He Really Mean What He Said?

Mickey’s Not-So-Scary Halloween Party is in full swing! The separately ticket nighttime soiree returns this year to delight Disney fans of all ages for the spooky season on select nights from August 12 to October 31, 2022. Another new addition is a party featuring some of Disney Junior’s most popular characters. Perfect for kiddos, the Storybook Circus Disney Junior Jam will help get all their energy out after munching on Walt Disney World’s festive Halloween treats! Perhaps most entertaining of all the added experiences takes place at the Pirates of the Caribbean attraction. Live pirates interact with Guests at different locations inside the iconic ride.

As most Disney fans know, pirates can be some pretty mischievous characters. Jack Sparrow isn’t the only rascal to be up to his no-good antics. But how does a Guest know if one of these boisterous mateys is joking or being serious when they are such unreliable sources?

A TikTok creator, @idreamofdisney21, posted a video drawing attention to a character interaction at the swashbuckling experience. A little girl can be seen visiting a pirate in his jail cell. But, some Guests cannot tell if the character is acting or if he’s really annoyed with the child.

As the little girl stands in front of him with her toys, the pirate tells her to go away. He gets a bit sarcastic when she fails to move, repeating his request for her to go away! The girl finally catches on and starts to move.

The comments section had mixed reviews from viewers, with some frowning upon the interaction. The TikToker responded, “It is part of the Disney Mickey’s Not-So-Scary Halloween Party, and she wouldn’t let him out of the brig.”

So, what do you think? Did this pirate-clad Cast Member lose his cool, or was he just staying in character?

2022-09-01
Christy Weinberg
Previous: Pin Trading Isn’t the Only Swap Guests Can Make at Walt Disney World Resort
Next: Apply For This Coveted Disney Work From Home Position To Get Your Foot in the Door