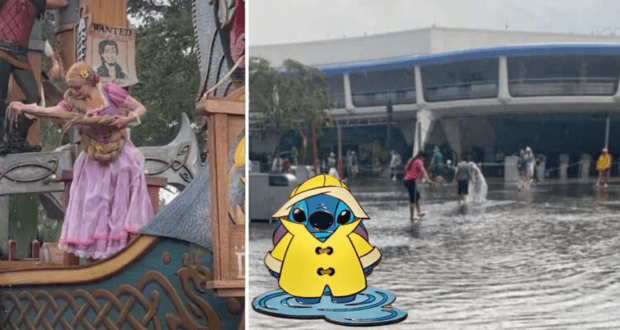 We’ve covered some pretty severe weather documented by Guests of Walt Disney World Resort as of late. Florida‘s feisty climate showcases itself in lightning and thunderstorms, as well as heavy rainstorms often caught on camera at the Theme Parks. 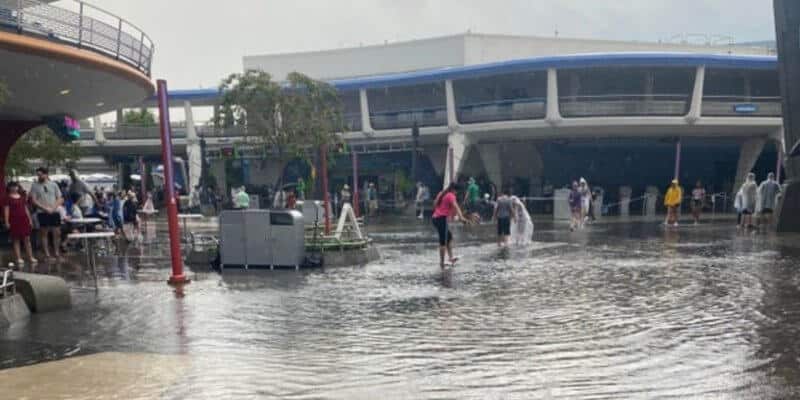 Sometimes, storms will force  Walt Disney World entertainment to abruptly come to an end, as seen in a TikTok video recently posted by @waltdisneyworldparks. Disney makes the call depending on the weather’s severity, and although disappointing to fans, cancelling the show is occasionally necessary for the safety of Cast Members.

Recently the Hocus Pocus Villain Spectacular at  Magic Kingdom was in the middle of a performance when Disney made the announcement. In swift fashion, the Cast Members quickly moved off stage.

Another TikTok video posted by @unlockdisney displayed quite a different scene at Magic Kingdom Park. As rain comes down in buckets during the Festival of Fantasy Parade, Cast Members go with the flow, completely staying in character.

As the rain builds up into puddles on the ground, cheerful Disney characters play it off, making it seem as if it’s all part of the show. The camera pans to Rapunzel who continues her acting, adding an amusing element to her performance.

How Disney charachters play in the rain. It started to pour but it made the parade so much better. #disneyrain #festivaloffantasy #disneyworld #disney #disneyprincess

Picking up her long braided hair, she squeezes a huge amount of water out of her mane, shrugging her shoulders and smiling at onlookers. Ariel sits elevated above the audience, on top of her shell, completely saturated with water, but continues to admire her dinglehopper treasure.

A character from Peter Pan can be seen jumping in puddles, which fits in effortlessly with the lost boys’ theme. Tinkerbell pouts with arms folded across her body as if to protest the unideal conditions, much like her feisty character in the movie.

Hats off to these amazing Disney performers who not only stayed in character but maintained a positive attitude during the parade. Guests spend a lot of money on their vacations to Walt Disney World Resort, and the Cast Members’ actions enabled them to enjoy the beloved entertainment offered at the Most Magical Place on Earth!