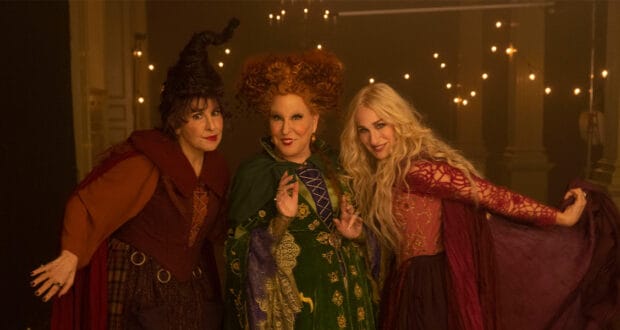 It’s REALLY happening! Fans of the cult classic Hocus Pocus (1993) have been eagerly awaiting a sequel. Disney announced at the 2019 D23 that they were answering our pleas! Now, the wait has paid off as we’re seeing the first teaser trailer drop for Hocus Pocus 2 coming soon to Disney+.

Several of the original Hocus Pocus cast is returning for the film sequel, including the wickedly wonderful Sanderson Sisters played by Bette Midler (Winifred Sanderson), Kathy Najimy (Mary Sanderson), and Sarah Jessica Parker (Sarah Sanderson). The talented trio is sure to once again run “Amuck“! Plus, Doug Jones is also reprising his role as Billy Butcherson.

The storyline of Hocus Pocus 2 goes as follows: “Three young women accidentally bring back the Sanderson Sisters to modern-day Salem and must figure out how to stop the child-hungry witches from wreaking havoc on the world. The world may have been free of Winifred, Mary, and Sarah and the fear they invoked in us all, but what happens when you mess with magic? It messes back.”

Walt Disney Studios has taken to social media to drop its first teaser trailer for Hocus Pocus 2 including, “This Halloween season, some legends never die. Hocus Pocus 2, an Original movie event, is streaming September 30 on #DisneyPlus. #HocusPocus2”. Check out the Hocus Pocus 2 trailer below:

Eek! It looks fantastic and spooky! Interestingly enough, while the film gives the appearance of a Salem village, filming actually took place on sets in Rhode Island with previously leaked footage that reveals we may see the Sanderson Sisters in a flashback at a young age during Hocus Pocus 2.

Be sure to gather up your friends and family and schedule a Hocus Pocus 2 movie night on September 30, 2022!