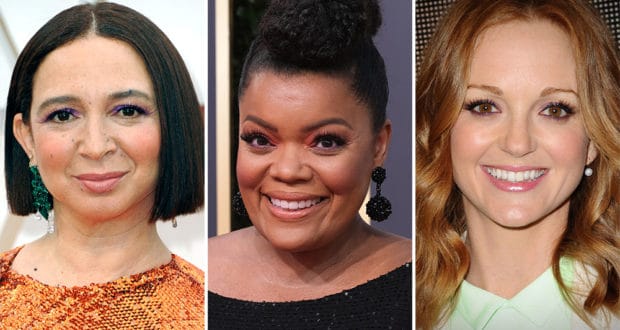 Fans of Enchanted have anxiously be waiting for the more information on the sequel Disenchanted. We learned that Patrick Dempsey and Amy Adams would be returning, but now we have learned that Maya Rudolph, Yvette Nicole Brown and Jayma Mays would join the cast as well.

Along with Dempsey and Adams, both Idina Menzel and James Marsden will be returning to the film as well.

We are excited to see what will happen with Giselle after she found herself stuck in real-life Manhattan in the first film. What other adventures and challenges will she face?

The three new ladies to join the cast have been seen in many other films.

Maya Rudolph has previously starred in “Hubie Halloween”, “The Mitchells vs The Machines”, “Bridesmaids”, and the upcoming Disney+ Original “Luca”. Yvette Nicole Brown is currently starring in the Disney+ Original series “Big Shot” and has also starred in “The Big Fib” and “Lady and the Tramp”. Jayma Mays has previously appeared in “Glee”, “Bill & Ted Face the Music”, “Red Eye”, “The Smurfs” and “Paul Blart: Mall Cop”.

Are you looking forward to seeing this new film hit Disney+?