Disney+ just released an exciting new trailer that tells the untold story of the groundbreaking visual effects company behind the Star Wars (1977) movies. ‘Light & Magic’ takes us behind the scenes of George Lucas’s Industrial Light & Magic (ILM), a company he created over forty-seven years ago.

Surprisingly, no visual effects companies existed when Lucas was writing Star Wars. This prompted George to form his own visual effects team, working from the ground up and introducing concepts people had never experimented with before.

Lucas and his team maintained an attitude much like Walt Disney’s famous saying, “If you can dream it, you can do it.” During this exciting time, ILM worked together to create innovative concepts in the form of computer graphics, digital editing, and special effects.

In the inspiring trailer, George Lucas states, “Visual effects create the magic that makes people want to go to the movies. Movies are special effects.” 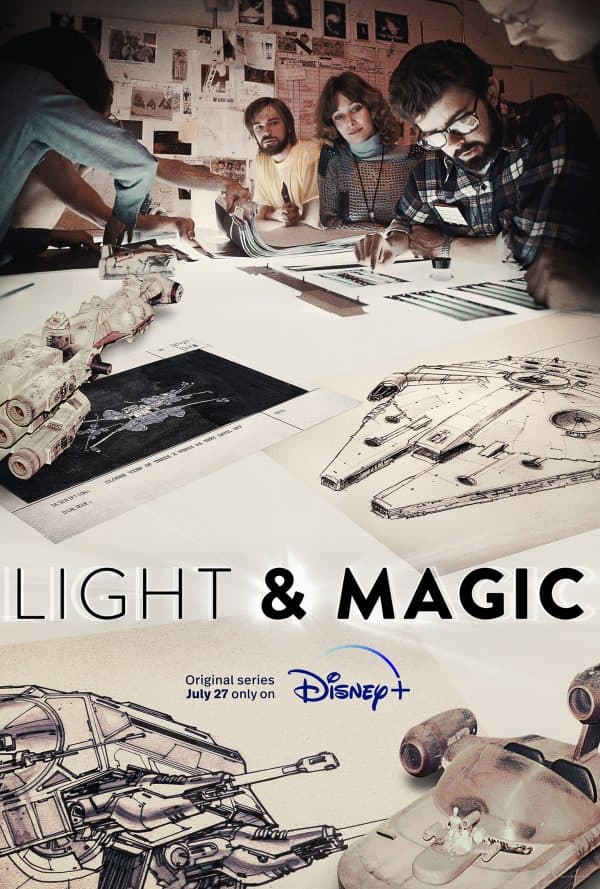 With endless possibilities and a sky’s the limit mentality, ILM has accrued sixteen Oscars and more than three hundred and fifty films over the years. The series is directed by Academy Award-nominated filmmaker Lawrence Kasdan, with Brian Grazer and Ron Howard as its Executive Producers.

Guest appearances include Kathleen Kennedy, James Cameron, and The Mandalorian (2019) directors, Deborah Chow and Jon Favreau. Suffice it to say, the success of the Star Wars movies wouldn’t have been possible without the hard work of the people at ILM.

Star Wars is one of the world’s most successful franchises, with a total of twelve movies, several spinoff shows, books, merchandise, rides, and more. One element that makes the films so compelling is the believability and realness of the immersive universe George Lucas created. Transporting viewers to another dimension, the breathtaking visual effects in these films are the star of the show. Star Wars fans, mark your calendars for July 27, when this six-episode original docuseries will stream on Disney+!