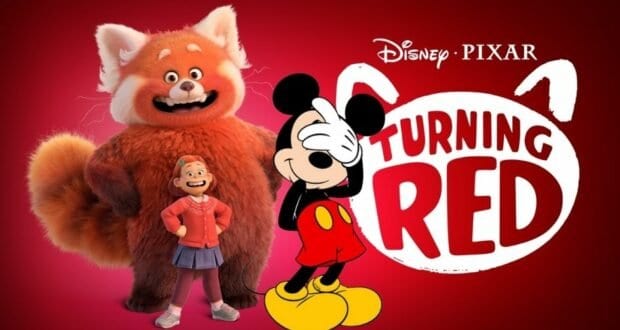 Anytime Disney / Pixar Animation Studios releases a new movie we make a BIG deal out of it! We call in friends and family. We get themed snacks. We detach from phones and distractions and really get all into it.

Just think about Disney’s latest film, Encanto (2021), and the massive success that came with the film. From box office success to a musical score that topped Frozen’s entrancing “Let It Go”, we can’t get enough of it. We’re even hoping Disney dishes out an Encanto-themed attraction!

But then… then there is Disney’s newest film, an exclusive Disney+ release called Turning Red, directed by Domee Shi, that dropped on Disney+ March 11, 2022. Without spoilers and what can be picked up from the film’s trailer, Turning Red is about a teenage girl named Mei Lee (voiced by Rosalie Chiang) that finds herself turning into a giant red panda when her emotions get high.

As a Disney Pixar film family, we all sat down to watch the show… including a 7-year-old boy, a 13-year-old girl, and the Millennial-aged Mom and Dad.

First off, if you’re not prepared to talk with your 7-year-old son about what monthly needs for pads are, you might want to skip Turning Red. Or do you have a 13-year-old daughter like us (the same age as the main character in the story), well, this is the perfect way to make her feel uncomfortable real fast.

So, here’s the deal. We know that Disney is extra excited that an ALL-women crew are the creative minds behind Turning Red. And we agree… how cool is that?! But honestly, could it possibly have resulted in a film that could only relate to females in the mom age range?

As we watched the film, we quickly learned that it wasn’t meant for children as other Disney films are. Our 7-year-old son quickly got bored and left the room to play with toys. You need to understand he LOVES screen time and will watch anything… but not this. Puberty isn’t a topic he cares to talk about just yet.

Our 13-year-old daughter was excited to see the Disney main character was the same age as her. But instead of enjoying it, she was quickly scratching her head instead of laughing along. She did sit through the entire movie but kept asking, “Why, Disney… WHY??”

Our best guess is the creators of the film wanted to reach all those Millennial moms out there (yes, raising my hand!) with advice on how to parent our daughters.

Again, without spoilers, the film does shine a light on a difficult mother-daughter relationship as Mei works through issues with her mom, Ming Lee (voiced by Sandra Oh). Friendship and decision-making are other key components as Mei is part of a friend group that includes Miriam (Ava Morse), Priya (Maitreyi Ramakrishnan), and Abby (Hyein Park).

While we love the idea of the Disney film, the family movie night quickly went from the usual “yay, Disney!“ to our youngest disappearing with our teen daughter trying to hang in there for a review that ultimately left her wondering what’s next for Disney/Pixar?

As a family, we are all for straight talk and being open and honest. It’s just not something we expected for a movie night with Disney in mind! So, moms, want some parenting advice for your children? This is your movie! Besides that, we aren’t sure what the target audience for Turning Red is.

Do we recommend the Disney+ exclusive, Turning Red? The message got lost. The animation was not at a Pixar movie level. And overall, it was just a really odd film. It’s one to watch maybe once but definitely not something our family recommends for a family night movie.

Sorry, Disney for a harsh movie review. We love you…. but wow, in our personal opinion, we know you can do better.