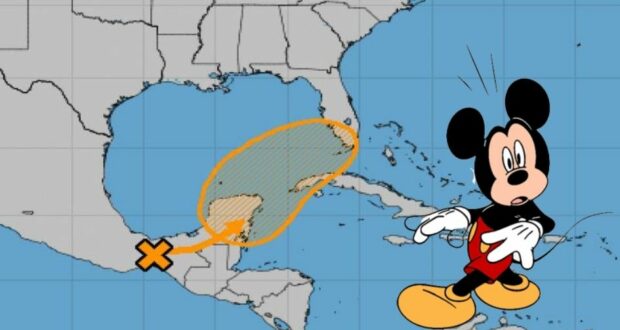 Traveling to Walt Disney World Resort in the near future? Take note that with hurricane season upon us, the 1st tropical system looks like it may take aim at Florida within the next few days, possibly having an impact on Central Florida.

RELATED: What To Bring On a Rainy Disney World Day

On the eve of the official start of Florida’s hurricane season beginning June 1 and running through November 30, we’re seeing that the 2022 hurricane predictions previously reporting a busy season are likely to be true.

While Florida is no stranger to rain, tropical storms, and hurricanes, when planning your theme park vacation should include time checking on the weather in your daily plans. Flights into Orlando International Airport have been known to be canceled due to heavy storms, along with Park hour adjustments at Central Florida theme parks such as the Disney Resort and Universal Orlando Resort.

The National Hurricane Center has been keeping an eye on the remnants of the Pacific category 2 Hurricane Agatha that hit near Puerto Angel, Mexico with 105 mph winds on Monday (May 30, 2022). According to a report from Orlando Sentinel, the storm now has higher odds of reforming into the first tropical storm in the Atlantic this season with Florida as its target.

After Hurricane Agatha made landfall on Monday it weakened but may reform into a system with the potential of becoming Tropical Storm Alex. Predictions of development show an impact on Florida later this week with still much uncertainty as we watch along with the National Hurricane Center.

Regardless of when you travel to Walt Disney World during this hurricane season, be sure to know which attractions operate in heavy rain at the Disney Parks, as well as how to prepare for a rainy day at Magic Kingdom, EPCOT, Disney’s Hollywood Studios, and Disney’s Animal Kingdom.