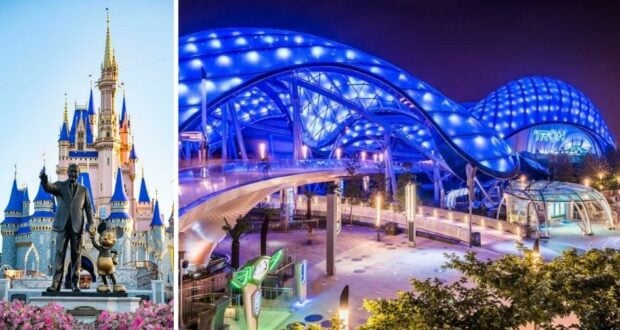 5 Years After Being Announced, Disney’s TRON Is FINALLY Lighting Up

Ok, Disney fans. How are we hanging in there? It’s been a LONG (and we do mean a long) time since we first began talking about Magic Kingdom Park’s newest roller coaster, TRON Lightcycle / Run coming to Walt Disney World Resort. Well, Disney is taking steps closer to opening with a new update!

The highly-anticipated TRON coaster was first announced at D23 in 2017. Five years later (yes, that’s longer than it took to build the entire Magic Kingdom Park), Disney is making progress on its massive new Tomorrowland attraction.

TRON has halted the operation of the Walt Disney World Railroad due to the train tracks’ path crossing through the construction zone and needing to be re-routed. The iconic attraction has teased its opening soon, which could also be a good sign that TRON may be getting close to its final stages.

“This curved-wave structure serves as the Upload Conduit to the Grid, where guests, known as Users, will race beneath on Lightcycles as they begin their competition. In preparation for the race, the Show Lighting team is hard at work testing the system and programming more than 1,200 fixtures across the surface. The canopy and exterior plaza will be brought to life in the coming months as the project team continues uploading and integrating additional show elements.“

The light fixtures look stunning at night! We already have an idea of how TRON will look upon completion as it is modeled after its sister attraction in Shanghai Disneyland, which opened in June 2016. We also know to expect fast-moving steel motorbikes to ride along to match the TRON (1982) film franchise.

The semi-enclosed coaster will allow Disney Park Guests to experience “the Grid” while riding on a light cycle – much like as featured in the TRON film.

Of course, the COVID-19 pandemic has not helped with the construction and the slow crawl of TRON Lightcycle / Run’s progress. If the experience is anything as incredible as EPCOT’s new rollercoaster, Guardians of the Galaxy: Cosmic Rewind, we’re sure it will all be worth the wait. Hopefully, Disney will provide an opening date soon enough!