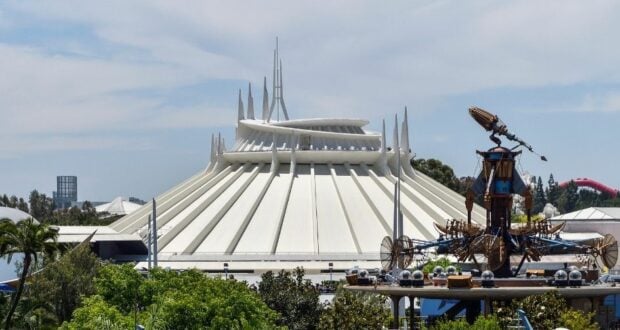 Calling all Space Mountain fans! Disney has revealed the iconic thrilling rollercoaster ride through the dark is about to receive a fan-favorite retheming in soon.

This galaxy-themed dark coaster elevates the heart rate rather quickly with its quick twists, turns, and drops as it feels like the ride vehicle speeds faster and faster through outer space. And now, Disneyland Park Guests will want to take note that Disneyland will be retheming the attraction for a limited time.

That’s right, Disneyland Resort has announced, “Space Mountain will be closed on April 28, 2022, and will reopen as Hyperspace Mountain on April 29 for a limited time.”

“Fend off crossfire from swarms of Rebel X-wing starfighters and Imperial TIE fighters amidst an intergalactic onslaught!”

“Your mission begins with a briefing from Admiral Ackbar—the Rebel Alliance needs help flying reconnaissance vessels to survey an Imperial Star Destroyer. After being escorted into hyperspace by an elite X-wing squadron, you arrive only to find the Star Destroyer waiting with a swarm of TIE fighters—it’s a trap!“

“As Rebel forces valiantly battle Imperial vessels, you’re caught up in a barrage of blaster fire. Maneuvers become more intense as you join the Rebel squadron for one final, courageous assault on the menacing Star Destroyer. It’s an epic Star Wars combat scene taken straight from the films—but hurry, Hyperspace Mountain is only open for a limited time!”

The retheming will be a temporary overlay for the Disney Park that comes in perfect timing to go along with May 4, 2022, for “May the FOURTH be with you” (AKA Star Wars Day).

Currently, Disney has not announced any retheming for Space Mountain at Walt Disney World Resort although recent permits show work is to be expected in the future.

It seems like this Disney Resort is keeping its Star Wars magic at Disney’s Hollywood Studios with experiences like Star Wars: Rise of the Resistance, Star Tours – The Adventures Continue, and Millenium Falcon: Smugglers Run.