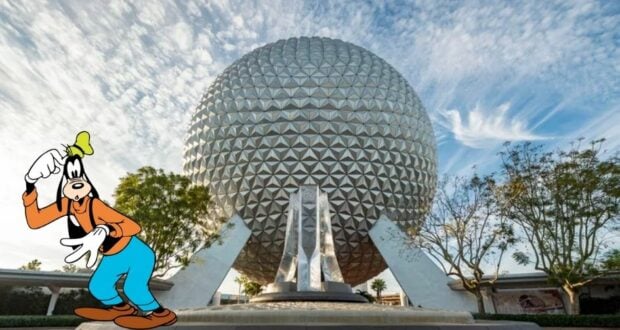 Look Down! EPCOT’s New Restaurant Will Have Oddly Intriguing Floors

As the EPCOT International Flower and Garden Festival along with the Disney Park’s transformation to develop into four neighborhoods continues on, we’re seeing excellent progress on highly-anticipated Disney Park experiences such as Guardians of the Galaxy: Cosmic Rewind and even Journey of Water Inspired by Moana.

Disney has revealed a new EPCOT restaurant will be making its grand debut this spring called “Connections Cafe and Eatery“. Located in the former Future World portion of EPCOT (now World Celebration neighborhood), near Club Cool and the Creations Shop, the restaurant will feature Disney quick-service style food along with a Starbucks as the “Cafe” portion of the restaurant.

Now, Disney Imagineer, Zach Riddley is diving into the details, taking Guests on a look at what we can expect from the new restaurant’s flooring! Seems simple enough, right? Well, we’ll soon be walking on Walt’s artwork.

Zach Riddley took to social media to share, “EPCOT is full of iconic shape language that evokes grand ideas about cities, innovation, and the potential for design to make the world a better, more integrated place. These iconic EPCOT designs were evident as far back as Walt’s original site plans for the Florida project, where EPCOT was to serve as the literal and conceptual “center” of Walt Disney World, where one could live, learn and experience innovations that would later come to define everyday life as we know it.“

“EPCOT has never stopped evolving – what Walt foresaw as a constant “state of becoming.” To this day, Imagineers continue to draw inspiration from those original concepts and ideas for the Park throughout the current transformation.”

“Today I’m proud to reveal a pretty cool example of this, in its own state of becoming as we speak. In the new Connections Café and Eatery, Guests will discover detailed flooring designs (yes, more flooring) that pay homage to the radial layout and celebrate the purposeful geometry and organic symmetry of EPCOT.“

“You can see various stages of the process, from the linework to a near-finished product just prior to its final buffing. These designs are created with a sustainable bio-polymer material which is 3-D printed to provide an intricate template. That linework is then laid out by skilled craftspeople to create inlays in the poured flooring material, with the final design revealed through rounds of sanding and buffing, where classic and cutting-edge techniques meet.“

But wait, there is more! Zach Riddley continues on with another post including more photos of what’s to come for the flooring of EPCOT’s Connections Cafe and Eatery with the infusion of Walt’s legacy as the focal point. Riddley goes on to share:

“Disney fans may recognize this first image (above) from the EPCOT film, released in 1967, as Walt Disney described his grand vision for the “Florida Project.” Standing proudly with pointer in hand, Walt relayed with great enthusiasm details on the early master plan for “Disney World,” including an “airport of the future,” an entrance complex for visitors, an Industrial Park, and an area reserved for theme parks at the north of the property.“

“Walt passed away very soon after articulating this vision, but the spirit of his concept – that Walt Disney World and EPCOT would be a place where the power of possibility would inspire the world – lived on.“

“That idea is alive today and continues to inform our design choices for EPCOT. Drawing inspiration from Walt’s Florida project master plan, Imagineers designed a flooring inlay for Connections Eatery at EPCOT which would infuse the original DNA of the Resort into this new location within World Celebration.”

“One of my favorite details is the intersection of I-4 and US 192 highways, represented by the orange lines which cut across the map. Linework showing original ideas for EPCOT, Magic Kingdom, and other recreational amenities reflect the diversity and scale that has always been the guiding vision for Walt Disney World.“

“Many Guests may not know the origin of this design. But these details, big and small, matter to the work we do – reflecting our own history and bridging our past to our future. Walt dreamed of a place that would connect the world through ideas, wonder, and inspiration. And we are honored to reflect his vision in our design for World Celebration and for Connections Café and Eatery. I can’t wait to share more as we get closer to opening the doors this spring!“

Who knew there could be SO much history in a single restaurant’s flooring! Walt will also be featured in the World Celebration portion of EPCOT behind Spaceship Earth with a new statue that will be called “Dreamers Point“.

We’ll be sure to look down at the floors as we check out Connections Cafe and Eatery when it opens later this spring!