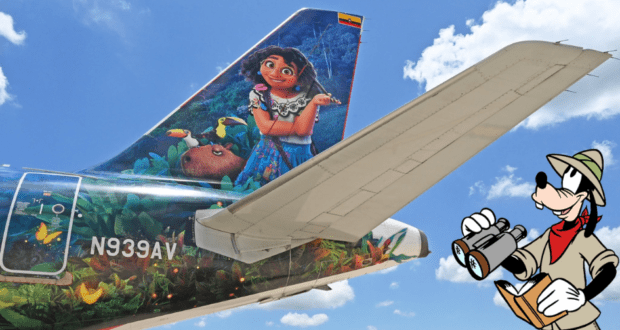 Orlando International Airport posted a photo of a unique airplane on their runway today, and it has a Disney theme! Mirabel was spotted gracing the aircraft’s vertical stabilizer along with the vibrant colors of her world.

This overlay may look familiar to some fans, as the design actually debuted in 2021. Colombian airline Avianca proudly flaunted the new painting as a tribute to Colombia’s culture and diversity.

The aircraft chosen for this design is an Airbus A320. The plane features a SpaceFlex cabin with two classes, plus and economy, and it can accommodate one hundred and eighty travelers.

It took over ninety people and twelve days to create the detailed image. The plane was transformed at Aviana’s maintenance, repair, and operations which is located in Rionegro, Colombia. Several airlines have teamed up with movie studios in the past in an effort to promote future films. Encanto (2021) is a meaningful movie for Columbia, with the plot focusing on the family Madrigal, who lives in the Columbian mountains.

Mirabel is a popular character for the Disney franchise, and she’s been making quite a splash in the news lately. In late June, she made her debut as part of the Disney Adventure Friends Cavalcade in Magic Kingdom Park, and fans have been loving it! Perched at the peak of the float along with Pocahontas and Mulan, the parade route takes the characters from Frontierland, through Liberty Square, and down Main Street, U.S.A.

She is joined by fellow Disney friends from movies such as Coco (2017), Brave (2012), and Moana (2016), to name a few. Some of the characters included in the parade are Miguel, Merida, and Moana herself.

With so many people flying this year, the Encanto plane would be a welcome sight. Make sure to keep an eye out for it if you’re traveling this summer!