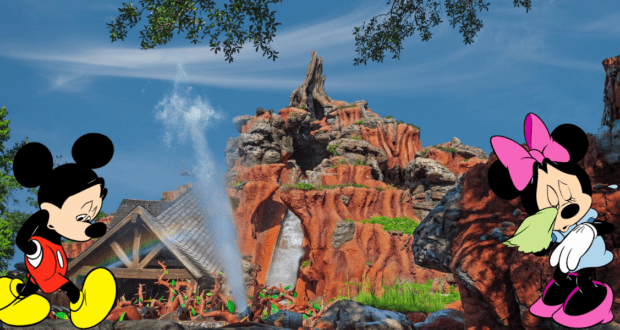 It was recently announced that Splash Mountain will officially close on January 23, 2023, and fans are beside themselves. The reaction has been split between diehard fans of the classic Brer Rabbit attraction who don’t want to see the theming go and fans of the film The Princess and the Frog (2009), who are excited to see their favorite princess receive her own attraction.

It should be noted that the film Song of the South (1946), the origin of Splash Mountain’s characters (such as Brer Rabbit, Brer Fox, and Brer Bear) and theming, is notorious for the cultural insensitivities associated with it, which contains stereotypes and caricature-like depictions of black people.

Despite this hidden history (as this film is incredibly difficult to access due to the controversies surrounding it), many fans of the attraction are unwilling to see it changed, even if that change gives the spotlight to Disney’s only African American princess.

One Guest captured a video of Splash Mountain’s queue completely empty, save for the queue’s loop music, made echoey by the emptiness. Many fans were quick to comment, lamenting the loss of this classic attraction.

One TikTok user wrote, “Soon it will be a core memory. I hate that they are changing it.” RELATED: As Hollywood Studios Proves to Be More Popular for Disney After Hours, Magic Kingdom Finally Sells Out Its First Date

An overwhelming portion of the comments are similar to this one as fans express what they’ll miss the most about this ride, how much they enjoy the classic catchy song “Zip-A-Dee-Doo-Dah,” and how they don’t want this attraction to change. A few comments discuss the ride’s upcoming update in a more positive light. One TikTok user wrote, “Can’t wait to see the changes. Will I miss it[?] for nostalgia sake yes but problematic themes need to be retired.” However, it seems that these comments are in the minority.

How do you feel? Are you excited to see Splash Mountain turn into Tiana’s Bayou Adventure? Or are you dreading the upcoming changes?

2023-01-02
Isabella Reimer
Previous: Walt Disney World Dates for your 2023 Diary
Next: How ‘Temporary’ Is This Animal Kingdom Attraction Closure?