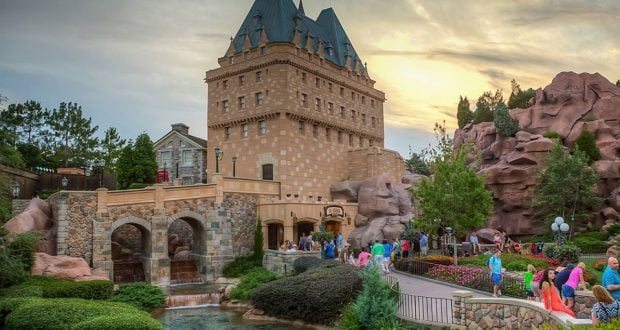 There’s always something thrilling about stepping into the Canada pavilion at Walt Disney World’s Epcot.  Maybe it’s the thrill of seeing my homeland represented in the most magical place on earth.  Perhaps it’s the soaring turrets of the pavilion’s gorgeous architecture, or the beautifully landscaped grounds.  Or it could be that I know I’m only minutes away from tasting that always amazing Canadian Cheddar Cheese Soup.  Though it’s sometimes overlooked (unless you’re heading to a reservation at Le Cellier!), this understated beauty of a pavilion deserves to be on your must-see list while in Epcot – even if you don’t hail from the Great White North!

Present in one form or another since 1982, one of the main attractions in Epcot’s Canada pavilion has long been the “O Canada!” film, narrated by Martin Short.  It’s been sadly in need of an update for awhile, and if you’ve been giving the pavilion a miss because you’ve seen the film countless times, you’ll want to drop by on your next visit to see the new film has replaced this iconic staple.  “Canada Far & Wide” provides a new and stunning look at Canada, in Circle-Vision 360.  It premiered in early 2020, and stars two familiar voices: Eugene Levy and Catherine O’Hara, who narrate the film.  There’s a whole new score by Andrew Lockington, a Canadian composer, and many Canadians from countless fields were consulted in the making of the film, which displays diverse regions across this vast country.  Missing the previous “O Canada!” film?  Not to worry, some remnants have been carried forward into the new film, including the song “Canada (You’re a Lifetime Journey).”

The Canada pavilion is arguably one of Epcot’s most beautifully landscaped pavilions, and it’s dominated by the castle-esque peaks of the huge “Hotel du Canada”, based on Ottawa’s historic Victorian hotel, Le Chateau Laurier.  You’ll see the iconic totem poles used to tell stories and keep records among some First Nations families and clans in Canada; each totem pole is unique and tells its own fascinating tale. Wander along the path to enjoy the stunning gardens on either side (made even more beautiful when hundreds of flowers are in bloom during Epcot’s Flower & Garden Festival), and stop to enjoy the relaxing pond, fountains, and waterfall.  The garden represents Buchart Gardens in British Columbia, and this is the perfect place to unwind, appreciate your surroundings, and take a momentary break from the chaos of a busy day in the parks!

From traditional to quirky to cutting edge, you’ll find music and entertainment from all corners of the country represented at Epcot’s Canada pavilion.  Get to know classic songs written by Canadian musicians as you listen to – and sing along with – Alberta Bound.  The Canadian Voyageurs are eager to share their culture with you as they serenade you with music from across the country, and you’ll be mesmerized by the storytelling of Suroît, a folk band that incorporates different musical styles including bluegrass, rock, Celtic and Cajun.  Enjoy the rock rhythms of the quartet Raffy, and explore the punk, Maritime, and folk stylings of Bodh’aktan.  Many of the members of Blueberry Grass Band, hailing from Québec, were previously Cirque du Soleil performers!

One of the most popular restaurants in Walt Disney World’s Epcot, if not on property, calls the Canada Pavilion home.  Le Cellier Steakhouse offers signature dining in a rustic, yet elegant, cellar meant to resemble the grand setting of Canada’s famous Victorian railway hotels, such as Le Chateau Frontenac and Le Chateau Laurier.  It’s often booked months in advance, so if you’re planning on enjoying a taste of Canada at this exquisite table service restaurant, make sure you make a reservation well in advance! Le Cellier earns well-deserved praise for its steaks, which are fabulous.  But don’t stop there!  The restaurant is also known for its magical Canadian Cheddar Cheese Soup, made with beer and smoked bacon.  If you want to sample some other truly Canadian dishes while you’re here, classic poutine is always a great choice – add lobster if you’re in an adventurous mood.  Dessert offers up plenty of hearty maple options, such as Maple Crème Brulee and Warm Pecan-Brown Butter Tart with Maple Ice Cream, or you can opt for a taste of British Columbia with Duke Caboom’s Favorite Chocolate Nanaimo.  You really can’t go wrong with any offerings at Le Cellier Steakhouse! If you visit the Canada pavilion during a festival like Epcot Food & Wine Festival, you’ll see a poutine booth here with various delicious options, which is perfect if you weren’t able to snag a coveted reservation for Le Cellier!

While it lacks the impact of Japan’s magnificent Mitsukoshi Department Store or the uniquely beautiful back alley shops of the Morocco pavilion, there’s more to shopping at the Canada pavilion than meets the eye. To be sure, the expected maple themed merchandise dominates, including items bearing the Canadian flag and maple-flavored goodies.  You’ll find the perfect souvenir for the hockey lover in your party here, and of course, plush toy versions of popular Canadian animals like moose, wolves and beavers abound. But look beyond the predictable souvenirs, and you’ll find some special merchandise you might not expect.  We’ve encountered personalized leather items, delightfully scented soap made from goat’s milk, and gorgeous works of art by Indigenous Peoples, including wood carvings and colorful graphics of Canadian wildlife that include Hidden Mickeys.  You might even come across Mickey-themed apparel inspired by Hudson’s Bay, the oldest company in North America and to this day, one of Canada’s best-known retailers.