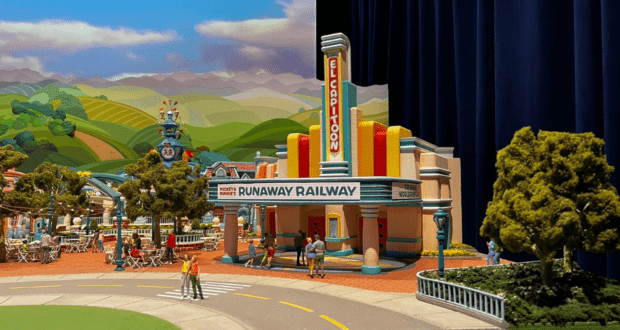 D23 Expo 2022 commences today, but Disney fans have already been treated to some exciting new sneak peeks! Disneyland has been teasing the reimagining of Mickey’s Toontown since last year. An exciting venture, the Resort has big plans to change the area into an even more family-friendly location.

The iconic spot closed in March, and Guests have been anticipating its upcoming changes. Disney Parks Blog has given fans some glimpses of Disney’s plans, including an exciting new attraction! Mickey & Minnie’s Runaway Railway is already enjoyed by Guests of Walt Disney World Resort.

Disneyland will be getting its own enhanced version of the ride, which will debut upon the land’s opening in early 2023. D23 Expo just gave us an inside look at the details of Toontown’s transformation in miniature model form! Theme Park content creator David Vaughn shared some photos on Twitter.

Mickey’s Toon Town is already an ideal spot to take children. With a play area, several tables, and places to relax, it’s the perfect spot for a Disney day with toddlers. But Disney plans to make the area even more spacious, by including additional play activities and attractions created with younger Guests in mind.

Despite news that Disneyland’s version of Mickey & Minnie’s Runaway Railway would be enhanced, the attraction looks very similar to its Walt Disney World counterpart. Theme Park journalist Scott Gustin gives us a closer look at Disney’s plans in pictures below the model.

The images look very similar to Disney’s Hollywood Studios attraction. Imagineers have not disclosed how the ride will differ, but it will be exciting to see the changes firsthand once Guests are able to experience the attraction next year!

Theme Park journalist Brooke Geiger McDonald gives us more insight into the ride’s look and feel with a poster she shared on social media. All aboard! Mickey and Minnie are front and center on a colorful train, with Goofy, Donald, Daisy, and Pluto in the background.

Stay tuned! Disney Tips will keep you updated as more news about this epic endeavor is released.