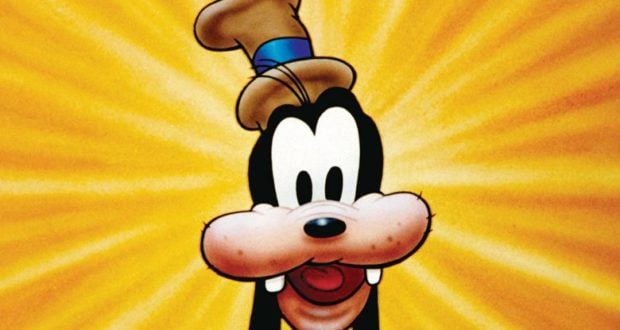 Who doesn’t have a soft spot for the class clown?  In Disney vernacular, of course, that would be the inimitable Goofy, Mickey’s aptly named pal and member of the Sensational Six, alongside Mickey, Minnie, Donald, Daisy, and Pluto.  Generations of Disney fans have fallen in love with Goofy’s clumsy, lovable and hilarious personality and unforgettable hijinks.  But Goofy is much more than simply a source of comic relief.  His history is full of fascinating tidbits, and we’re just scratching the surface today with a few fun facts about beloved Goofy.

1. A Goof by Any Other Name

If you thought this beloved Disney character’s name couldn’t be any goofier, wait until you hear what his original moniker was!  When Goofy was first introduced to the world in 1932, his name was Dippy Dawg.  He also looked quite different than the Goofy we know and love today.  Since then, he’s gone through several incarnations, and has been referred to at various times as George Geef, Goofus D. Dawg, and G.G. Goof, and finally Goofy Goof.  That’s right, Goofy has a last name (however adorably redundant)!

Even those with a passing acquaintance with Goofy have likely heard some of his catchphrases – “ah-yhuck” and “gawrsh”, among others.  But Goofy’s most famous utterance is his signature holler: “Yaaaaaa-hoo-hoo-hoo-hooey!!!” (you really can’t hear that in any voice BUT Goofy’s, can you?).  The famed holler first appeared way back in 1941 in the short The Art of Skiing, and it was voiced by an actual yodeller, Hannes Schroll.  While Goofy is now voiced by Bill Farmer, the holler is so famous that it even shows up in movies, shorts and attractions that Goofy himself isn’t even in!  Now that’s a legacy.

Cow?  Dog?  Anthropomorphic character of indeterminate species??  Let’s be honest – at one time or another, you’ve probably wondered exactly what animal species Goofy represents.  Typically, “dog” and “cow” get the highest number of votes.  And sure enough, we can confirm that Goofy is, in fact, a dog (after all, he was originally named “Dippy Dawg”).  Goofy may have many more human characteristics than Pluto, the other canine Sensational Six character, but he was definitely designed as a dog.  We’re not sure exactly what breed, though, and animators aren’t spilling the beans, although many of his characteristics seem to suggest he’s a hound of some sort.

With all of his aliases over the years, it’s only natural that Goofy should have – wait for it – a secret identity!  With powers akin to those of Superman, Super Goof, as Goofy’s alter ego is called, emerges whenever Goofy eats peanuts (or, as he calls them, Super Goobers).  Awkwardly, his powers wear off at the most inopportune times, to maximize comedic relief, of course!  While the only visible difference between Goofy and Super Goof is a costume change (Super Goof’s blue cape and red suit magically appear and disappear as Goofy transforms), almost everyone is fooled by his disguise, allowing him to keep his identity secret.  Hey, it works for Superman.

Goofy was never meant to become a full-fledged Disney character.  In his first incarnation as Dippy Dawg, he was created simply as a one-time gag, for the Mickey Mouse short Mickey’s Revue, on May 25, 1932 (the date which is therefore considered Goofy’s birthday, incidentally!).  But audiences loved the character so much – as did Walt Disney’s staff members – that he was brought back time and time again as a recurring character in other Disney shorts.  He even landed his own series of shorts in 1939, that delighted audiences through the 1940s and 50s.  As Goofy proves, there really are no small parts!

No other member of the Sensational Six has offspring that we know about, though a couple of them are uncles.  But Goofy has a son, Max Goof, which sets him apart from other classic Disney characters.  While Max was first introduced in the 1950s as “Goofy Junior”, he looked quite a bit different then, and most fans will know him from the 1990s Goof Troop tv show, where he appeared in his current redesigned and renamed form.   We’re not sure who Max’s mom is, but we do know that Goofy is a single dad, and he and Max have appeared together in several features over the years.

Have you ever been watching a Disney film and thought a character in the background looked oddly familiar?  Chances are you have, because Disney is famous for inserting Easter eggs into its movies to thrill and reward fans.  It can be a ton of fun looking for out-of-place character favorites hiding in plain sight!  Goofy fans can re-watch The Little Mermaid, The Lion King 1 ½, Who Framed Roger Rabbit, Saving Mr. Banks, Aladdin and Flubber for glimpses of Goofy.

If you’ve ever thought about working in a Disney park, you’ll know that Disney has strict height and size requirements for the various face characters and fur characters that appear in the parks.  Being an inch too tall or too short for a given character’s specifications makes you ineligible to play that role.  Since Goofy’s height is integral to his endearing awkwardness (whether or not you believe the claim by Disney animators that his shoe size is 18 ½!), you’ll need to be pretty tall yourself if you want to play Goofy: at least six feet tall!  You’ll also have to learn to walk around in Goofy’s hilariously huge shoes, of course.