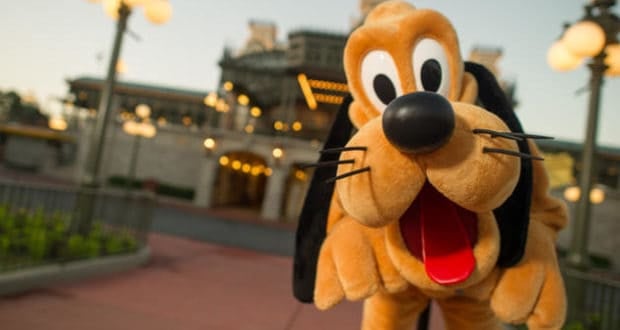 If we needed a reminder of how important our pets are, it’s come over the past year as many of us have spent more time at home, enjoying the company of our four-legged friends.  So what better time than now to celebrate one of the most legendary pets in the whole Disney realm – Pluto!  Here are a few facts you may or may not know about this loveable pup.

Pluto is one of Disney’s classic characters.  In fact, he is a member of a very exclusive group referred to as the “Sensational Six”, that also includes a few other characters you may have heard of: Mickey Mouse, Donald Duck, Goofy, Minnie Mouse and Daisy Duck.  We’re pretty sure Pluto hasn’t let fame go to his head, though!  Pluto has the distinction among the Sensational Six of being the only character not anthropomorphized – although all six characters are animals, the rest take on human characteristics, dressing like humans and speaking, while Pluto does not.

Pluto sure looks good for his age.  He was created back in 1930, which means he’ll celebrate his 91st birthday in 2021!  His first film was 1930’s The Chain Gang, in which Mickey Mouse escapes from a chain gang.  Walt Disney was so pleased with Pluto’s appearance, the studio used him twice – as two different bloodhounds – in the film.  Pluto quickly shot to stardom from there, taking on a variety of roles and names, until in 1931, he appeared for the first time as Mickey Mouse’s pet in The Moose Hunt – and his role in the Disney universe was cemented!

Pluto’s full name is Pluto the Pup, but it hasn’t always been that way.  Walt Disney considered an array of endearing pet names, including Homer the Hound and Pal, before arriving at this loveable canine’s identity; Pluto was even called Rover when he appeared as Minnie’s pup in the 1930 film The Picnic!  It’s likely not a coincidence that Walt finally settled on Pluto the Pup’s name around the same time Pluto the planet was discovered, and making headlines!  (Let’s not tell Pluto the planet he’s named after has been demoted!)

You’ve probably never heard Pluto do more than bark, and there’s a reason for that – he was designed to be a pantomime character, who conveys emotion through action rather than speech.  But you CAN actually hear the pup’s voice, if you know where to look!  Check out 1931’s The Moose Hunt, and listen for “Kiss me!”, Pluto’s line to Mickey.  That’s right, Pluto actually speaks!  You can also hear his inner thoughts if you watch the 1935 film Mickey’s Kangaroo.  These are the exceptions to the rule, of course; Pluto’s lack of speech actually proved ground-breaking, because it allowed animators to show his personality strictly through animation, instead of through dialogue.

Anyone who had a childhood pet knows how attached kids can get to animals – and Walt Disney was no different.  He lived on a farm in Missouri as a child, and while growing up, he was lucky enough to form bonds with plenty of fun-loving pups.  And these dogs were the inspiration for Pluto when Walt created him years later.  We think Walt would appreciate that Pluto is has remained the same loveable, down-to-earth dog who tries to stay out of trouble, but whom trouble usually manages to find, throughout his adventures for the better part of the last century.

Pluto the Pup has had an enviable career since he debuted nearly a century ago!  At first, he was a supporting character, in no less than two dozen Mickey Mouse films.  In 1937, after having established himself firmly in the Disney canon, he received his very own series, and appeared in the first instalment, entitled Pluto’s Quin-Puplets.  That’s right, Pluto has puppies, they’re adorable, and they’re just as adept at finding trouble as their dad!  In total, Pluto has a whopping 89 short films to his name between 1930 and 1953, some of which were nominated for an Oscar (his film Lend a Paw actually won, in 1942!).

In addition to his many animated films, Pluto has also featured in myriad comics throughout the last century.  This multi-talented canine later returned to animated theater with The Prince and the Pauper in 1990, and he’s even been featured over the years in television series and in direct-to-video films.  He also enjoys the distinction of starring in his own Silly Symphony cartoon, which no other member of Mickey’s gang can boast; check out Mother Pluto from 1936 to see it for yourself.  Guess there are perks to being man’s (mouse’s?) best friend!

Pluto proved he was ready for duty during World War II.  After Walt Disney received numerous requests flooding in from across the world for the loveable canine to pose for battle insignia, Pluto answered the call, appearing on nearly 50 military insignia.  Nothing says “beloved pooch” better than being chosen by dozens of military outfits as their official mascot!