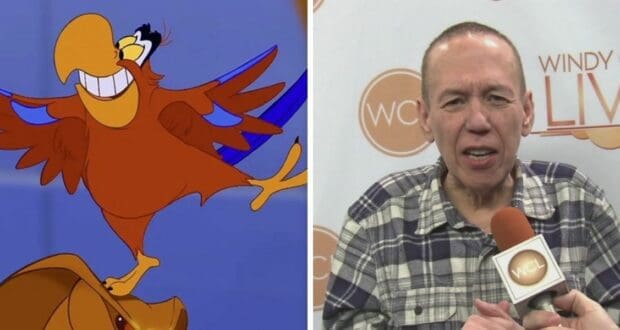 The Disney bird was voiced by comedian Gilbert Gottfried, who has today, April 12, sadly passed away at the age of 67. The Gottfried family revealed the sad news on the actor’s official social media pages:

“We are heartbroken to announce the passing of our beloved Gilbert Gottfried after a long illness. In addition to being the most iconic voice in comedy, Gilbert was a wonderful husband, brother, friend and father to his two young children. Although today is a sad day for all of us, please keep laughing as loud as possible in Gilbert’s honor.”

Born in Brooklyn, New York on February 28, 1955, Gilbert Gottfried was a popular comedian famous for his distinctive voice. Gilbert’s career spans back to the 1970s when he was a Cast Member on the comedy television series Saturday Night Live. After starring in The Cosby Show in the 1980s, Gilbert was a hit in Eddie Murphy’s Beverly Hills Cop II (1987), where he played business manager Sidney Bernstein.

Gottfried was known for his crude humor and iconic voice, which helped bring many animated characters to life on screen, including Iago the parrot in Disney’s Aladdin and the Aflac duck in the insurance company’s television commercials. The Hollywood actor had a long-term illness, with Glenn Schwartz, Gottfried’s longtime friend and publicist, revealing that Gottfried suffered from Recurrent Ventricular Tachycardia due to Myotonic Dystrophy type II.

The news comes after the sudden death of Gottfried’s friend and fellow comedian, Bob Saget, back in January. Gilbert Gottfried shared this heartbreaking image on January 21, writing:

This photo is very sad now. RIP Bob Saget and RIP Louie Anderson. Both good friends that will be missed.

This photo is very sad now. RIP Bob Saget and RIP Louie Anderson. Both good friends that will be missed. pic.twitter.com/DLJ8Ntt7LN

The photo has now become ever sadder, with the world now missing all three comedians. Our thoughts are with Gottfried’s family at this time.