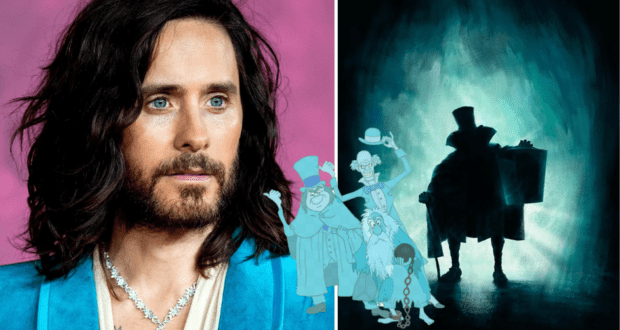 Deep in the darkness of the Haunted Mansion attraction at Disneyland Resort resides an extraordinary apparition. Known as the Hatbox Ghost, the animatronic is an iconic addition to the popular Disney Parks ride.

This is due in part to his nifty parlor tricks! He can make his head disappear from his body and reappear in the hatbox he holds! Another standout aspect of this cheery Disney character is the way he looks! With glowing colors of blue and green, the ghost laughs creepily, astonishing unknowing passerby’s rounding the corner. The Hatbox Ghost appeared in the original version of Disneyland’s Haunted Mansion but was removed shortly after due to technological failures.

It made its way back in 2015, much to the excitement of Disneyland fans! A new Haunted Mansion movie is in the works, and we’ve got some exciting details on the actors who will reportedly be joining the cast. Expected in March 2023, IMDb already lists a few of the film’s reported stars. Owen Wilson from Cars (2006), Rosario Dawson who plays Ahsoka Tano in the Mandalorian (2019), Danny DeVito, and Tiffany Haddish have already been named.

News just broke that Jared Leto would reportedly be playing the Hatbox Ghost in the film! One Take News shares that the character’s design will mirror the animatronic in Disneyland’s Haunted Mansion ride.

Another fun detail we’ve learned is that his face may appear on renaissance style paintings throughout the mansion. Jared Leto has taken on some pretty interesting projects over the years, and there’s no doubt he’ll bring an entertaining interpretation to the role. The actor is rumored to be working with Disney on another much-anticipated project. Tron: Ares, an assumed sequel to Disney’s iconic Tron (1982) series, is expected to arrive in 2025.

The project is reportedly in development and will premiere on Disney+. This is long-awaited news for fans of the sci-fi film and is said to be a passion project for Jared Leto.

We can’t wait to see what Disney has in store regarding the Haunted Mansion movie—looking forward to its expected release next year!