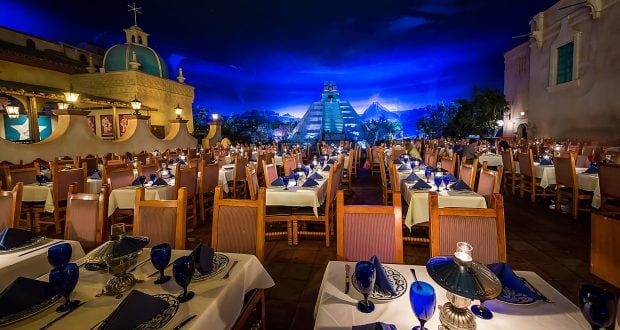 If you’re seeking a romantic spot for a meal with a loved one, you might be tempted to head to Disney Springs, Disney’s BoardWalk, or a Disney Resort Hotel. And while you can certainly find an abundance of atmospheric restaurants with tantalizing bites in any of those places, don’t count Disney’s Theme Parks out just yet! Here are a few of our favorite utterly romantic restaurants in Walt Disney World Theme Parks.

Be Our Guest Restaurant

It probably comes as no surprise that this iconic restaurant in Walt Disney World’s Magic Kingdom Theme Park ranks high on our romance meter.  Disney’s classic animated film Beauty and the Beast tells one of the most famous love stories of all time, and its namesake restaurant Be Our Guest Restaurant is exquisitely executed.

Painted ceilings, gold chandeliers, perpetually snowy windows, an enchanted rose – it’s all here!  If you can snag a table in the dramatically moody West Wing, do so – but the romance quotient is at least as high in the Grand Ballroom, so that’s an excellent backup plan.  Dishes are French-inspired and include options like artisanal cheeses, filet mignon, macarons, and of course, the famous Grey Stuff.

Couples seeking romantic meals in Disney’s EPCOT Theme Park are spoiled for choice!  For our first selection, Guests should head to the France Pavilion in the World Showcase.  This is France, after all, and just about everything here screams romance.

Monsieur Paul is the epitome of romance and would be our top recommendation, but since it hasn’t reopened since the pandemic, Guests craving l’amour can head downstairs to visit Chefs de France.  The atmosphere is fancy and very French, and delectable dishes range from escargots to French onion soup to crème brûlée.  Bon appétit!

There’s no restaurant on Walt Disney World property quite like San Angel Inn Restaurante in the World Showcase at Disney’s EPCOT Theme Park.  First of all, it’s simultaneously inside a Mayan temple and has a view of a (different) Mayan temple.  Of course, we’re talking about the Mexico Pavilion, where it’s always twilight, and romance is the name of the game!

You could just walk by and admire this Mexican restaurant themed after a centuries-old hacienda.  But you owe it to yourself to eat here, and truly soak up the gently lit ambiance.  The Queso Fundido is a great option here (sharing a dish of delicious melted cheese sure sounds romantic to me), and for dessert, you can even enjoy a pyramid-shaped, chocolate-mousse-meets-tres-leches dream, again meant to be shared.

The atmosphere at Le Cellier Steakhouse in the Canada Pavilion at Walt Disney World’s EPCOT Theme Park is undeniably romantic.  Rustic stone arches, rich wood tones, and a hearty helping of dim candlelight set the mood, and the cases of Canadian wine scattered throughout the restaurant sure don’t hurt.

If you and your significant other are planning on a jaunt to the Great White North, what should you order? Dishes hail from Canada’s provinces and territories, and they’re the perfect cozy, feel-good compliment to Le Cellier’s décor.  We recommend starting with the famed Canadian Cheddar Cheese Soup, moving on to a signature entrée like Le Cellier Filet Mignon, and sampling some iconic Canadian flavors for dessert (give the Warm Pecan-Brown Butter Tart with Maple Ice Cream a try – you won’t be sorry!).

Our pick for the top romantic restaurant at Walt Disney World’s Hollywood Studios is a no-brainer: The Hollywood Brown Derby.  A replica of its famous counterpart in Hollywood, The Hollywood Brown Derby in WDW is similarly adorned with caricatures of celebrities.  It also boasts Cast Members in tuxedos, potted palm trees, a vaulted ceiling, and curved booths that recall the Golden Age of Hollywood.

If you can, sit on the second-floor gallery to maximize the romantic factor – it’s quieter than sitting on the main floor.  The Brown Derby Signature Burger is rumored to be one of the best burgers, if not the best, on Walt Disney World property, and the Grapefruit Cake uses the same recipe used by the original Brown Derby restaurant.

Walt Disney World’s Animal Kingdom Theme Park is big on adventure, travel, and, well, animals.  It’s not exactly renowned for boasting a plethora of romantic eateries.  And technically, Nomad Lounge is a lounge or bar, not even a restaurant.  But we still think it’s the most romantic spot for a bite at Animal Kingdom Park.

If you’ve ever eaten at Tiffins Restaurant, you’ll know that Nomad Lounge is adjacent to it, comprising an indoor lounge area and an open-air verandah.  We’ve enjoyed drinks at the bar before while waiting for our reservations at Tiffins, but the height of romance here is snagging a coveted riverside table to enjoy cocktails and small plates – bliss!

With or without kids, there’s no need to leave Walt Disney World’s Theme Parks for a sumptuous meal with a decidedly romantic setting.  Imagineers excel at creating evocative dining environments to suit every literal and figurative taste, and they’re all waiting for you here at EPCOT, Disney’s Hollywood Studios, Magic Kingdom, and Disney’s Animal Kingdom Theme Parks. So bring your significant other, and get ready for an unforgettable meal!