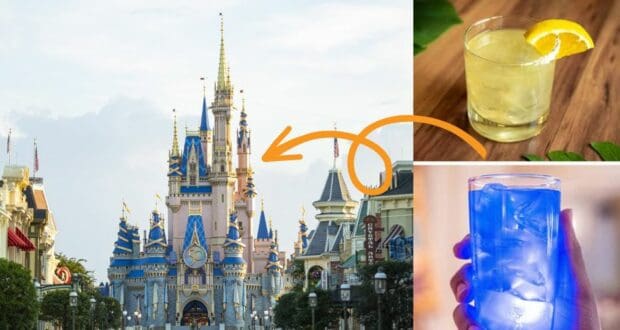 New Alcohol Selections Debut at the Once Dry Disney Park

While alcohol is prevalent at Walt Disney World’s EPCOT, Disney’s Hollywood Studios, and Disney’s Animal Kingdom, Magic Kingdom Park has been slowly introducing alcohol into the once dry Park. Now, we’re seeing the first look at new alcoholic beverages that have debuted at Magic Kingdom.

When Magic Kingdom opened in 1971, it was a dry Park, as Walt wanted it to be. No alcohol was available at any restaurant or location within the Park. In 2012, the first Magic Kingdom alcohol offering landed at Disney’s new Fantasyland restaurant, Be Our Guest.

Unlike the other Walt Disney World Resort Parks, Magic Kingdom still does not off alcohol at walk-up kiosks or quick-service restaurants. Guests must dine at a table-service restaurant to enjoy a sip or two of alcoholic beverages, except for the bountiful supply of beer and wine available at the Fireworks Dessert Party.

Check out the Jungle Bird Cocktail (top left) and the Golden Haze Margarita (top right) in the photo below:

RELATED: Disney Security Follows Kids With Alcohol in the Park

The Gold Rush (bottom left) and the Magical Beacon Cocktail (bottom right) are pictured above.

Be sure to snag those dining reservations 60-days in advance if you want to enjoy a cocktail or two while visiting Magic Kingdom Park!

2022-09-14
Jamie Sylvester
Previous: Is Disney Preparing to Bring Back a Past EPCOT Fireworks Show?
Next: Could This Beloved Entertainment Return to Disney’s Animal Kingdom?