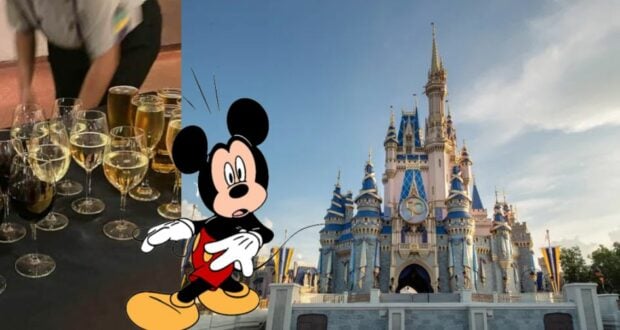 Relax and unwind… it’s Walt Disney World Resort vacation time! A common Disney misconception is that no alcohol is allowed within Magic Kingdom Park. This was true years ago, but now alcohol is available if you know the right places to look. And yes… there is an unlimited alcohol option as well.

Walt’s vision of the Disney Parks was not to include alcohol. In 1956, Walt was quoted talking about Disneyland Park, saying, “No liquor, no beer, nothing. Because that brings in a rowdy element. That brings people that we don’t want and I feel they don’t need it. I feel when I go down to the park I don’t need a drink. I work around that place all day and I don’t have one. After I come out of a heavy day at the studio sometimes I want a drink to relax.”

When Magic Kingdom Park opened in 1971, the Disney Park was known as a dry Park with no alcohol present. Fast forward over 40 years to 2012 when Magic Kingdom’s New Fantasyland opened. Fantasyland welcomed the stunning table-service restaurant, Be Our Guest. To match the french Beauty and the Beast (1991) theme, Disney allowed the table service to be the first to welcome beer and wine to its menu.

The adjustment has been one that has been at the center of some Disney fan debate, with some welcoming alcohol while others preferring for the Park to remain dry as Walt preferred in his quote over 65 years ago.

The “treats and seats” version allows Guests to remain in the Tomorrowland Terrace to enjoy eating and drinking while viewing the fireworks from the terrace with their own personal seat for comfort during the fireworks.

And while the unlimited desserts, cheese, and fruits are heavenly… Guests are also invited to sip away until their heart is content! Unlimited alcohol, including varieties of beer and wine, is readily available to Guests of the three dessert party selections and is included in the party fee.

While there is a time limit on how long Guests can stay to eat and drink, of course, you can enjoy sipping away on as many glasses of beer and wine as you’d like. During a recent visit to the “after-party” version of the dessert party, we were even told when the “last call” for alcohol was.

Take note that while, yes, this unlimited alcohol is a treat while on a vacation – the magic at Disney’s Magic Kingdom is still alive and well! Keeping the Park a family-friendly environment is the top priority so knowing your drink limit is key to keeping the pixie dust extra special.