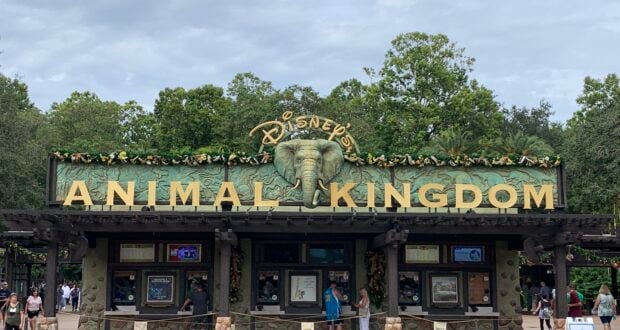 All of the Disney Parks have special, unique pieces that they are known for. EPCOT has their beautiful topiaries; Magic Kingdom has the inspiring Partners Statue, and in Disney’s Hollywood Studios you will find the massive Milennium Falcon in Galaxy’s Edge. Disney’s Animal Kingdom is certainly no exception to this rule.

Guests at Disney’s Animal Kingdom may have noticed that the sand sculpture, that sits outside the park entrance, which was inspired by the film ‘Ice Age: Scrat Tales’ is no longer on display. For years visitors to Disney’s Animal Kingdom have been greeted by absolutely amazing sand sculptures near the park entrance. Lately, they have been changed every few months as they are inspired by an upcoming release of a new film or DisneyNature documentary.

In the past Guests have enjoyed sand sculptures that were inspired by major Disney movies, such as The Jungle Book, Raya and the Last Dragon, Ice Age: Adventures of Buck Wild, and more.  These exquisite sand sculptures have also been inspired by DisneyNature films such as Monkey Kingdom, Secret of Whales, among others. However, they are now unveiling their newest sculpture inspired by the New DisneyNature documentary, Polar Bear. Polar Bear is scheduled to premiere on Disney+ on April 22, 2022, which also happens to be Earth Day.

This beautiful work of art has a group of Polar Bears in front of a background that looks to be ice and rocks.  Two of the Polar Bears are mothers with cubs, one mother Polar Bear is standing with the cub in between her front legs, and the second mother Polar Bear has a cub climbing on her back. Visitors will also see another two Polar Bears lounging to the left of the Polar Bear sand-sign in the front. Guests who stop to admire or grab photos may notice that there is what appears to be a sand tablet with a flat carving of a Polar Bear on it. The sand sculpture is also emblazoned with the Disney+ Logo in blue.

The DisneyNature documentary, Polar Bear is narrated by two-time Academy Award nominee, Catherine Keener.  According to the Disney website, the film “tells the story of a new mother whose memories of her own youth prepare her to navigate motherhood in the increasingly challenging world that polar bears face today.”  Polar Bear is directed by Alastair Fothergill and Jeff Wilson, who also directed DisneyNature’s documentary film Penguins. Anyone who watches this touching documentary will never look at Polar Bears quite the same way again and hopefully it will make all of us realize that we all need to do our part to protect these magnificent animals.

As Walt Disney once said, “Animals have personalities like people and must be studied.” So, let’s all do our part to study and help protect our precious wildlife.