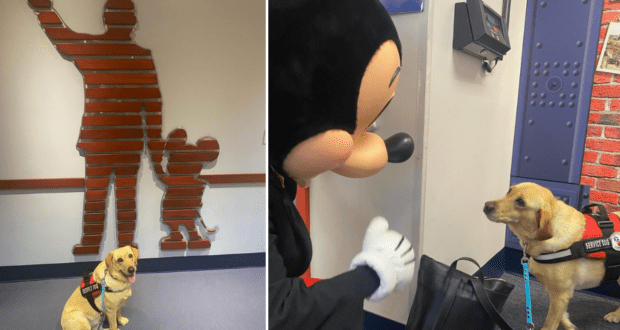 Noodle is an adorable three-year-old yellow lab service dog who will soon be working in Walt Disney Imagineering alongside her human, Jacklyn Krol. Mom took to Twitter to share the news that Noodle is officially the first dog Imagineer to report for work in Florida, and she is excited to get started!

Found out that Noodle is the first dog Imagineer (Imaginoodle) in Florida in history (waiting to confirm if there have been any in CA) and yes she got a 50th anniversary name tag. pic.twitter.com/Cwb2FkEqK4

During traditions, Cast Members are greeted by the “boss” himself, and Noodle especially loved making Mickey’s acquaintance:

The way she looks up at Mickey melts my heart. She was fully asleep and then Mickey came in and she did a couple of stretches and her new boss came over. First time touching a character. pic.twitter.com/pfVFJzrcid

According to Noodle’s Instagram, she loves “naps, snuggles, Law and Order: SVU, couch, snow, beach, and zoomies” and judging from her expressions while meeting Mickey and going through casting, she looks thrilled to be spending some time working at Disney.

As Noodle “said herself,” (and we would have to agree!):

Remember that service dogs are working very important jobs, so while it can be exciting to run into pups at Walt Disney World, please be mindful about not petting them. Instead, join us here at Disney Tips in welcoming Noodle and her human to Walt Disney Imagineering, and be sure to follow Noodle’s journey working for Disney on her very own social media accounts.

And, if you are interested in interning with Walt Disney Imagineering, be sure to check out Disney’s Professional Internships as new opportunities open up throughout the year.