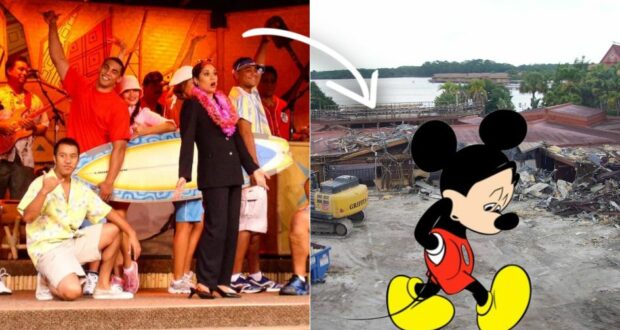 We’re sad to say… it has officially happened. The Spirit of Aloha dinner show at Disney’s Polynesian Village Resort has officially been destroyed, and heartbreaking photos have captured the demolished dining experience.

After almost 50 years of wowing Disney fans, Disney announced the closure of the iconic dinner show experience, Spirit of Aloha. Little did we know when the COVID-19 pandemic in March 2020, this would be the last we would ever see of the high-spirit dinner show that boasted spectacular Hawaiin-themed luau entertainment and a delicious plethora of Hawaiin cuisine.

Upon the Spirit of Aloha closure announcement, Walt Disney World Resort revealed a new tower is making its way to Disney’s Polynesian Village Resort. This tower will be home to Disney Vacation Club Villas and hold an estimated 200-250 new rooms… and will reside in the former location of Spirit of Aloha.

Disney fans weren’t thrilled about the new tower announcement, and the news of Spirit of Aloha being demolished didn’t soften the blow. The news was a shock to many, and Disney fans quickly took to social media to share the concern that this massive new tower design doesn’t seem to match the Polynesian culture that Disney’s Polynesian Village Resort is all about.

We previously shared photos of construction fencing being staged near Spirit of Aloha. Well, now the demolition is seemingly complete with nothing but rubble left of the beloved dinner show memories. The first photo below is the Monorail view looking out over the Spirit of Aloha location from last week:

Now, posted by @bioreconstruct, below is a photo of the Spirit of Aloha dinner show from the Monorail view as of June 18, 2022:

@bioreconstruct also captured a nearly straight-down aerial look at the demolition of Spirit of Aloha at Disney’s Polynesian Resort:

Change is inevitable, but it is hard to see fan favorites go. Thankfully, Disney has reopened its other dinner show, Hoop-Dee-Doo Musical Revue. We’ll be sure to share further details about the Polynesian Resort’s new tower as they are released.