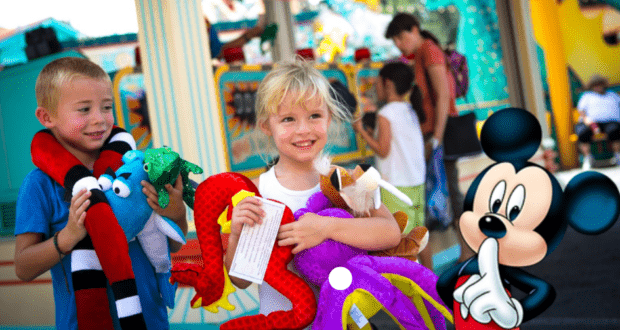 DinoLand USA is one of the most underrated themed lands in Disney’s Animal Kingdom, and really at the Walt Disney World Resort. Chester and Hester’s Dino-Rama is certainly a divisive area among Disney theme park fans, as some Guests are turned off by the carnival-like atmosphere while others appreciate the land’s detailed backstory.

One thing is for sure though, Chester and Hester’s Fossil Fun Games offer loads of prizes to their winners that at first glance may seem impossible to actually win. As a former DinoLand Cast Member, there are some little-known secrets that can help you make the most of your visit to Chester and Hester’s DinoRama and maybe even walk away with a fun, prehistoric prize or two.

Games of Luck vs. Games of Skill Contrary to what you may expect from a carnival setting, the Fossil Fun Games in DinoLand USA are not “rigged.” Typically carnival games will alter certain attributes like making the hoop smaller or the balls over-inflated on the basketball game.

In DinoLand, this is not the case. While every Guest walking away with a prize is simply unrealistic, it is “the Most Magical Place on Earth” after all, and Disney is certainly not looking to scam Guests on a couple of carnival games in Animal Kingdom.

While there are no rigged games working against you, there is one game in DinoLand that is a “game of luck” while the others are all “games of skill.” We’ll share the details of how you can increase your odds at each game below, but in general, with the exception of Comet Crasher, if you are good at the game, you have a chance of winning a prize. 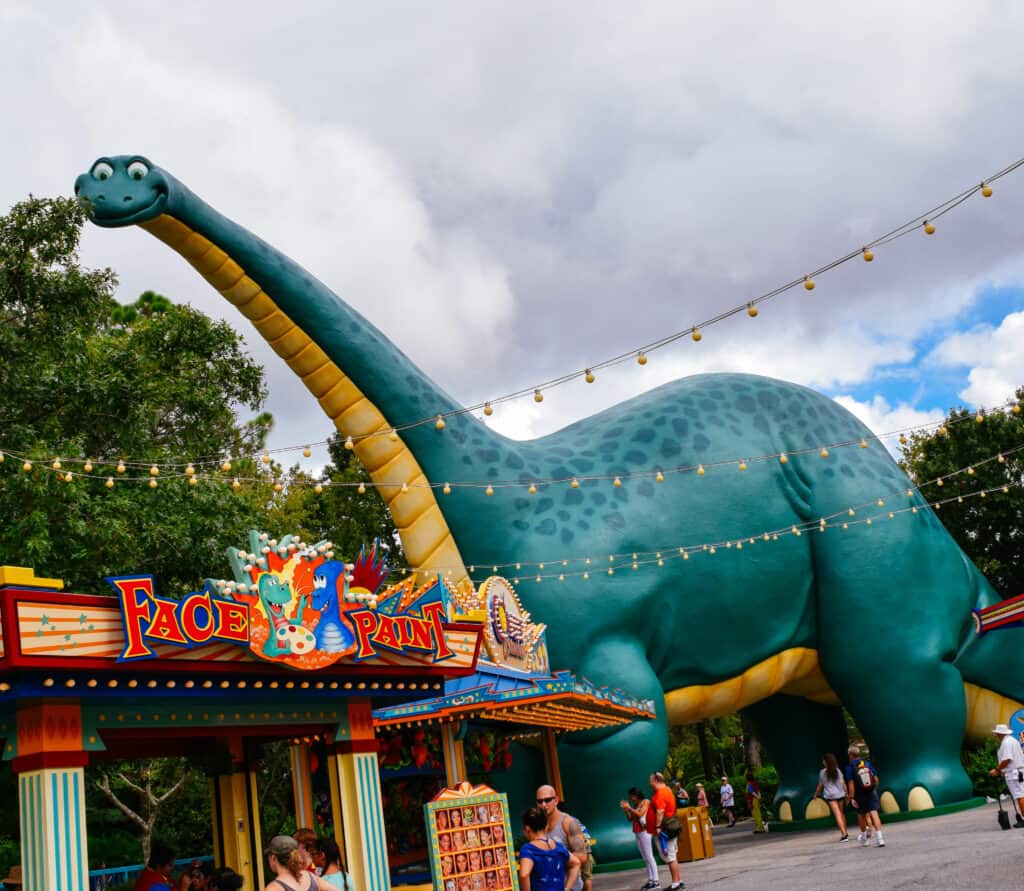 With the exception of Brontoscore (the basketball game) and Comet Crasher (the whiffle ball toss) as those are played individually, the fewer people who play the higher your chances are of winning a prize.

All of the competition-style games only give out one prize each round, so if you play with every seat taken you’ll have more competition and a more challenging time winning.

Of course, if your family is the only one playing, and your competition is only the people you came to the park with, someone you know will walk away with a prize. You may find yourself playing against only your own family when the park is quiet in terms of crowds, but generally, Cast Members are told to entice as many Guests as possible to play each round, so you should not ask to have your family be the only players. If it happens, consider it a magical moment!

Another tip is to scope out the competition and see if other families have adults playing as well as kids. For the most part, once an adult plays one of the competition-style games against kids, the little ones don’t stand a chance. Sometimes Cast Members will declare that one round is “kids only” for this reason. If this isn’t the case and your child or toddler is competing against adults, and a prize is important, you really are best off spending the extra cash to play alongside them. 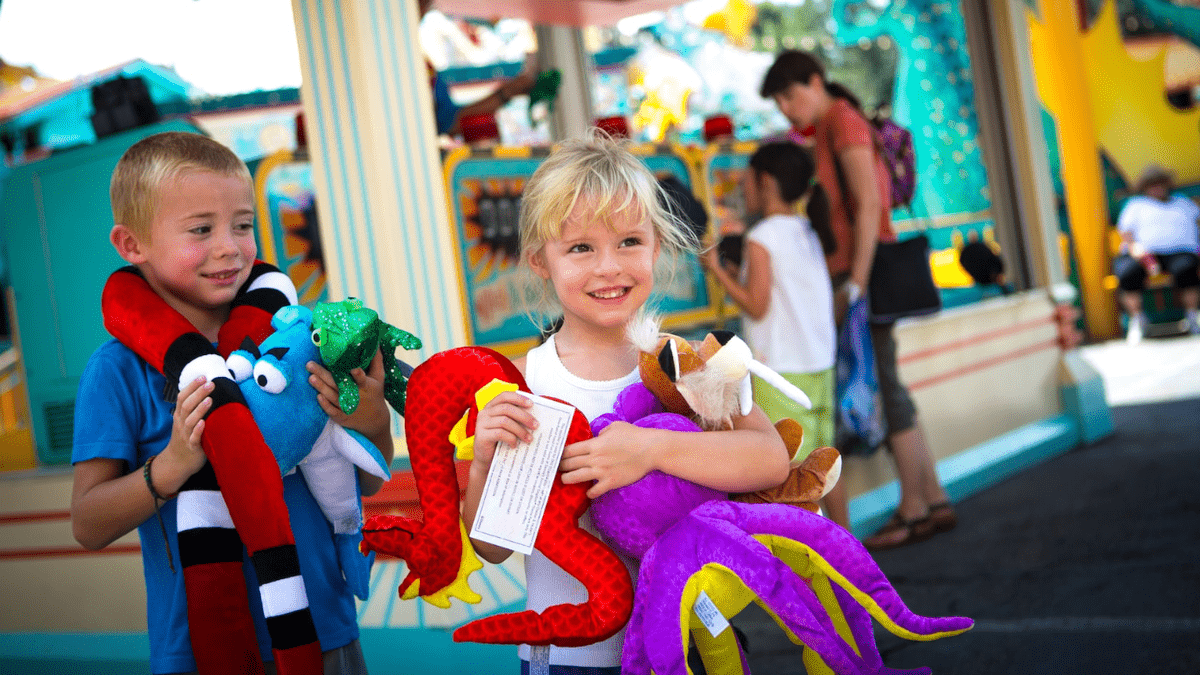 DinoLand’s version of a classic whack-a-mole game has Guests set up to hit Pachycephalosaurs, an interesting dino whose skull is about 10 inches thick (so they can take the hits in the game, Disney is all about storytelling, after all.)

To win this game, you need to be the first person to get to 150 points, which can be very easy for adults. As a result, this is one game where if your child is playing against other adults, you’ll want to play, too, if you want a solid chance at winning a prize.

Conversely, this game can be challenging for little ones, and it is not uncommon for a younger set of players to drag out rounds for upwards of 5-10 minutes before someone finally scores high enough to win. 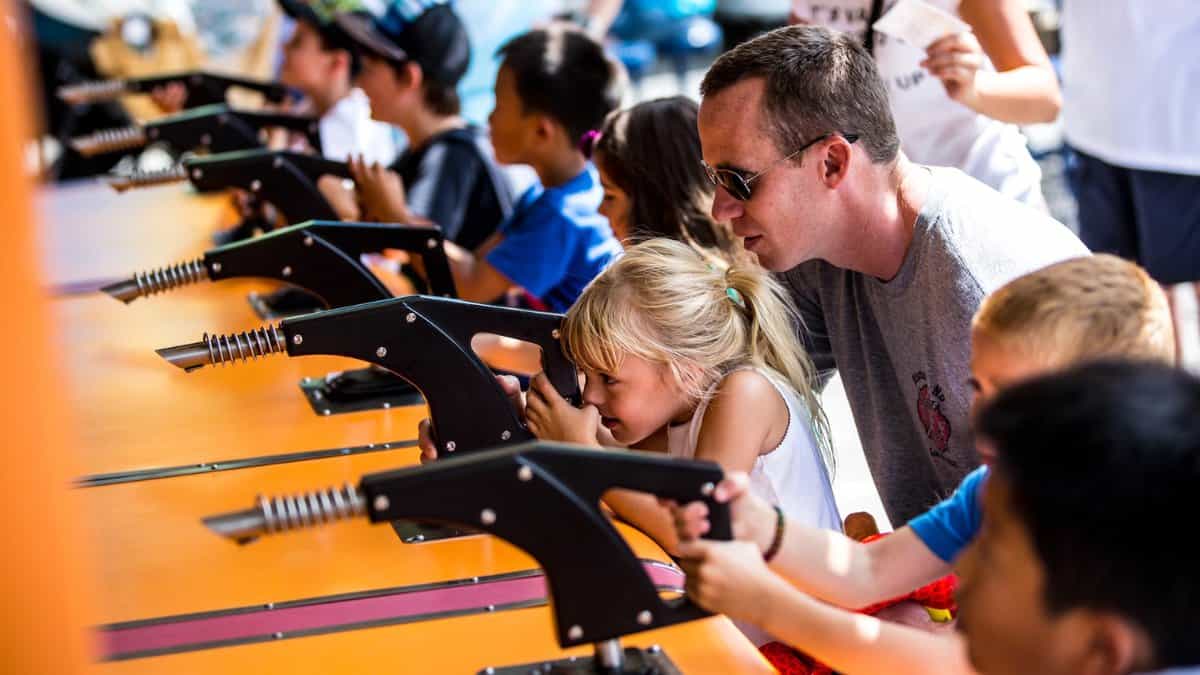 Fossil Fueler is your classic squirt gun game, but in the spirit of DinoLand it isn’t as simple as a water gun, so you are actually filling up gas pumps in the parking lot of Chester and Hester’s gift shop.

Since the DinoLand games are not rigged, this one is very much as it appears. Players who are successful at holding their aim on the target will see their gas pump move up quicker giving them a shot at winning a prize. 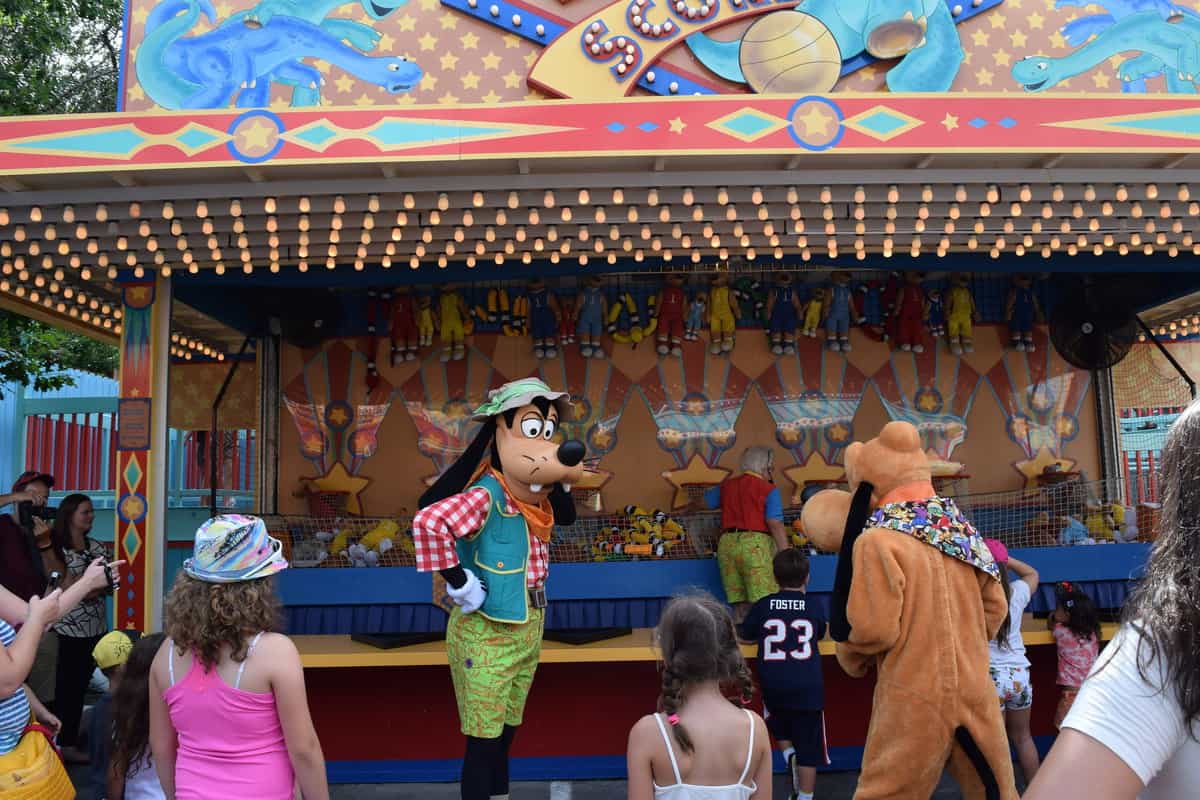 You do not need to be skilled at actual basketball to do well in Brontoscore. With normal inflated balls and a standard sized net, the only thing “off” at this game compared to regular basketball is the height and distance of the hoop.

Be gentle when you shoot, and aim for more of an up-and-over motion so the ball falls right down into the net. If you are successful at getting baskets, this game can give you some good chances at winning a prize because you are not playing against other Guests. 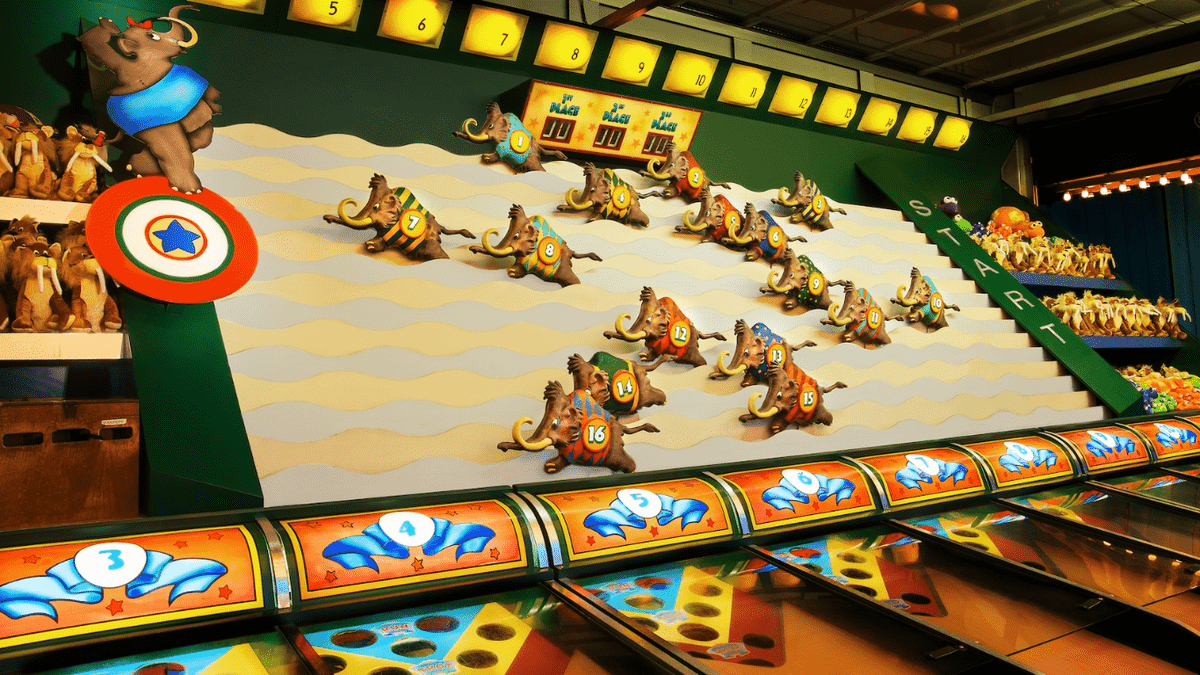 If you are good at skeeball, you will probably succeed at Mammoth Marathon! The only real variable here is that this game can accommodate a lot of Guests at once, so the more competition you have, the harder it could be to win.

Just be sure to keep your hands and arms away from the holes as you roll your “snowball” forward. Those mammoths could get hungry! 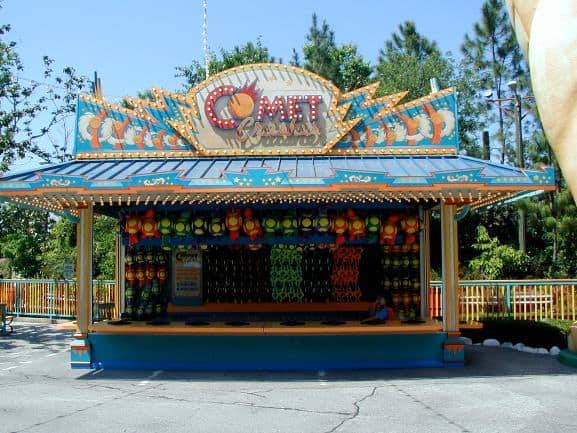 Comet Crasher is the most challenging game in DinoLand because it is the only game of luck. The goal of the game is to “crash your comet” in the outlined “craters” as opposed to the plain ones to win prizes. Often times, Guests will strategize where to toss the whiffle ball thinking it will land them in the right spot, but the game is entirely random so you may actually be better off simply throwing the ball wherever.

If your goal in visiting DinoLand is to win any prize, Comet Crasher may not be the best game for you because you are less likely to win here. If you do win, however, this game has the biggest prizes!

The Fossil Fun Games are truly an underrated family activity in Disney’s Animal Kingdom, and they are great fillers for when you find yourself between Disney Genie recommendations or Lightning Lane times, or if you are just looking for something interesting the kids will enjoy.

Just take these tips with you on your next trip, and you could be well on your way to taking home your very own plush dino. Good luck!

2022-05-26
Brittany DiCologero
Previous: Is Cirque du Soleil & Disney Drawn To Life Struggling?
Next: Sorry Popcorn Buckets, This Typhoon Lagoon Sipper Could Be the Hit of the Summer