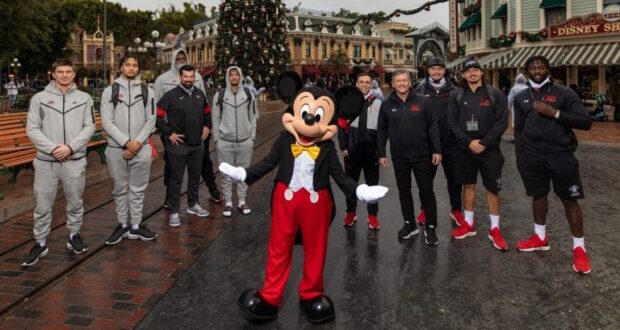 For many people, January 1 means a new beginning, resolutions, and spending time with family and friends. It also means football, particularly the Rose Bowl. Donna Fisk has shared details of the recent visit of the Ohio State University Buckeyes and the Utah Utes to Disneyland with Disney Parks Blog:

Yesterday, The Ohio State University Buckeyes and the Utah Utes made their first stop on the way to the 2022 Rose Bowl Game presented by Capital One Venture X in Pasadena, Calif., with a traditional visit to the Disneyland Resort!

Before meeting on the field, the teams joined for their first official pregame appearance: a festive cavalcade on Main Street, U.S.A., in Disneyland park.

Related: The Incredible Repair of “it’s a small world” Holiday at Disneyland

Also participating in the cavalcade were The Pasadena City College Tournament of Roses Honor Band.

Following the cavalcade, coaches and players were hosted in the historic Opera House on Main Street, U.S.A. for media interviews, then capped off their visit with the above group photo.

The teams will face off in the 108th Rose Bowl Game on Saturday, Jan. 1, 2022.  Ohio State finished the regular season with a 10-2 record, while Utah won its first Pac-12 Championship, finishing the season with a 10-3 record overall.

The 108th Rose Bowl Game presented by Capital One Venture X will air live on ESPN.