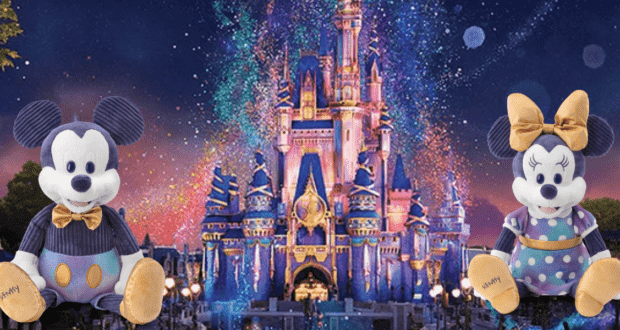 The Walt Disney World 50th Anniversary celebrations are still in full swing, despite the top tourist destination now being 51 years old. However, time is ticking as there are only a few months left for Guests to enjoy all of the celebrations. As previously confirmed, the magic is calling until March 31, 2023, the confirmed end date of The World’s Most Magical Celebration.

Whilst the celebrations will come to an end, it doesn’t mean that you have to end them in your own home. Scentsy has teamed with The Walt Disney Company to create an exclusive and limited edition range in honor of the Walt Disney World 50th Anniversary celebrations. With something to suit every Disney home, be sure to check online or with your local Scentsy consultant to avoid missing out on owning a piece from this limited edition Scentsy collection. Let’s take a look at all of the pieces that will be available to purchase very soon.

Earlier this year, we covered the release of the limited edition warmer that Scentsy released in honor of the Walt Disney World 50th Anniversary celebration. Whilst initially released in March, the Cinderella Castle Scentsy Warmer is being released once more to allow Guests to have a replica of Cinderella Castle in her 50th Anniversary decor in their own homes. The Scentsy Warmer will be available to purchase online on October 10, 2022, for $125. 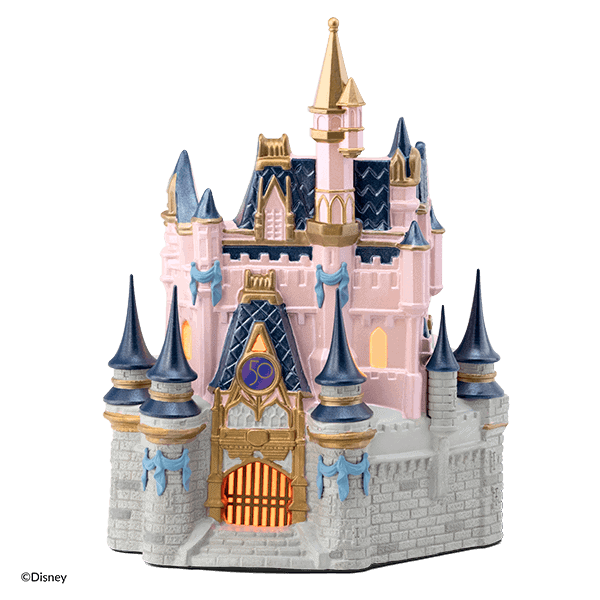 In addition to the release of the Cinderella Castle Scentsy warmer, a limited edition fragrance is being released that has been specially developed by The Walt Disney Company and Scentsy for the 50th Anniversary celebrations. The new scent, known as EARidescent, is a mix of cedar wood, citrus, peony, and apple blossom. Available for $26 per Scentsy Brick, the scent may smell a little familiar… Not only has it been developed by Disney to help celebrate 50 years of the Walt Disney World Resort, but it is also being used throughout the celebrations at each of the Walt Disney World Resort hotels. Who doesn’t want their house smelling of some of the iconic Disney hotels, such as Disney’s Grand Floridian Resort and Spa and Disney’s Yacht and Beach Club Resorts? 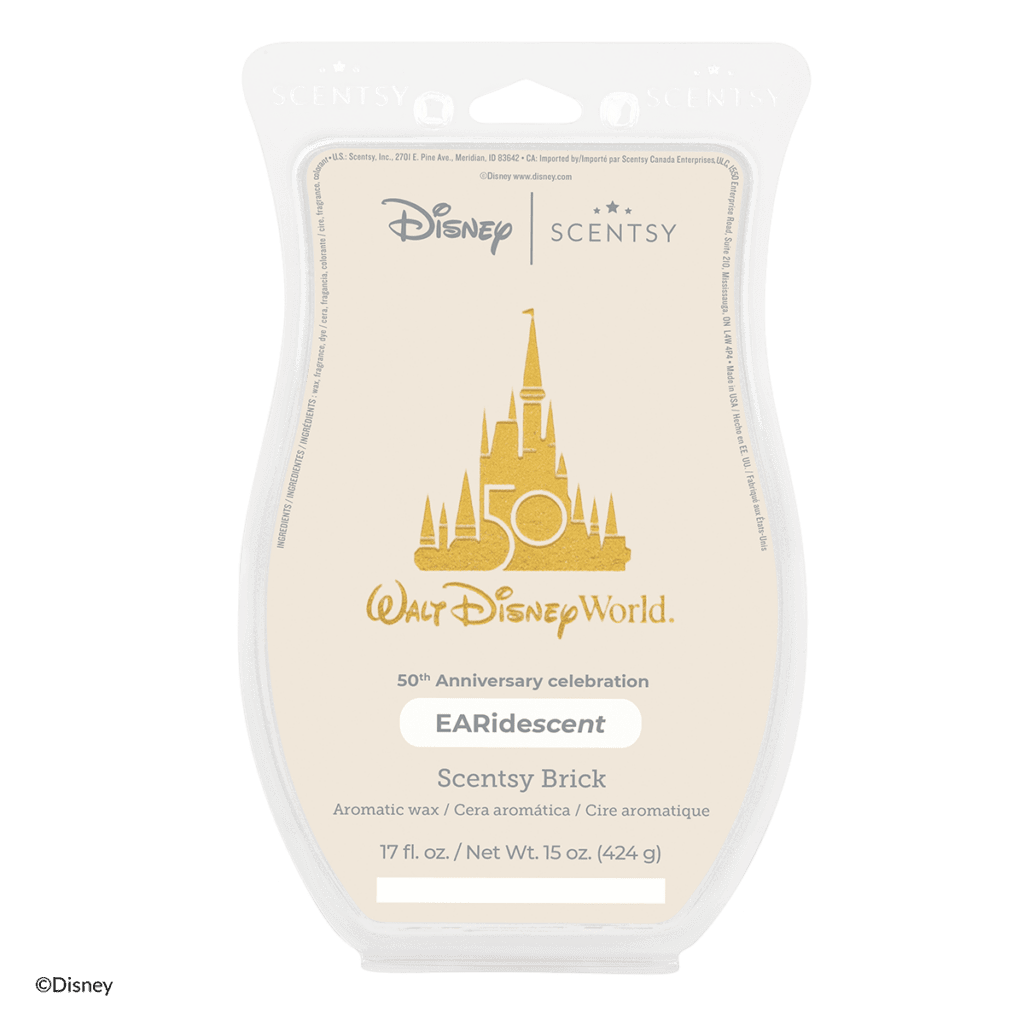 Looking for Disney plush but with a difference? Then you’ll most definitely want to add the brand new Mickey Mouse Scentsy Buddy that is new to the Walt Disney World 50th Anniversary celebration collection. Available on October 10, this Mickey Mouse plush features shimmering EARidescent fashions in honor of The World’s Most Magical Celebration, featuring a gold bow tie and EARidescent shorts. Mickey also features the 50th-anniversary crest on his shoe and comes with a Scent Pak in the Scentsy Disney Oh Boy! fragrance. He’ll be perfect for placing around the house to help scent a room. Sitting at 16” tall, Mickey Mouse is available to purchase for $50. 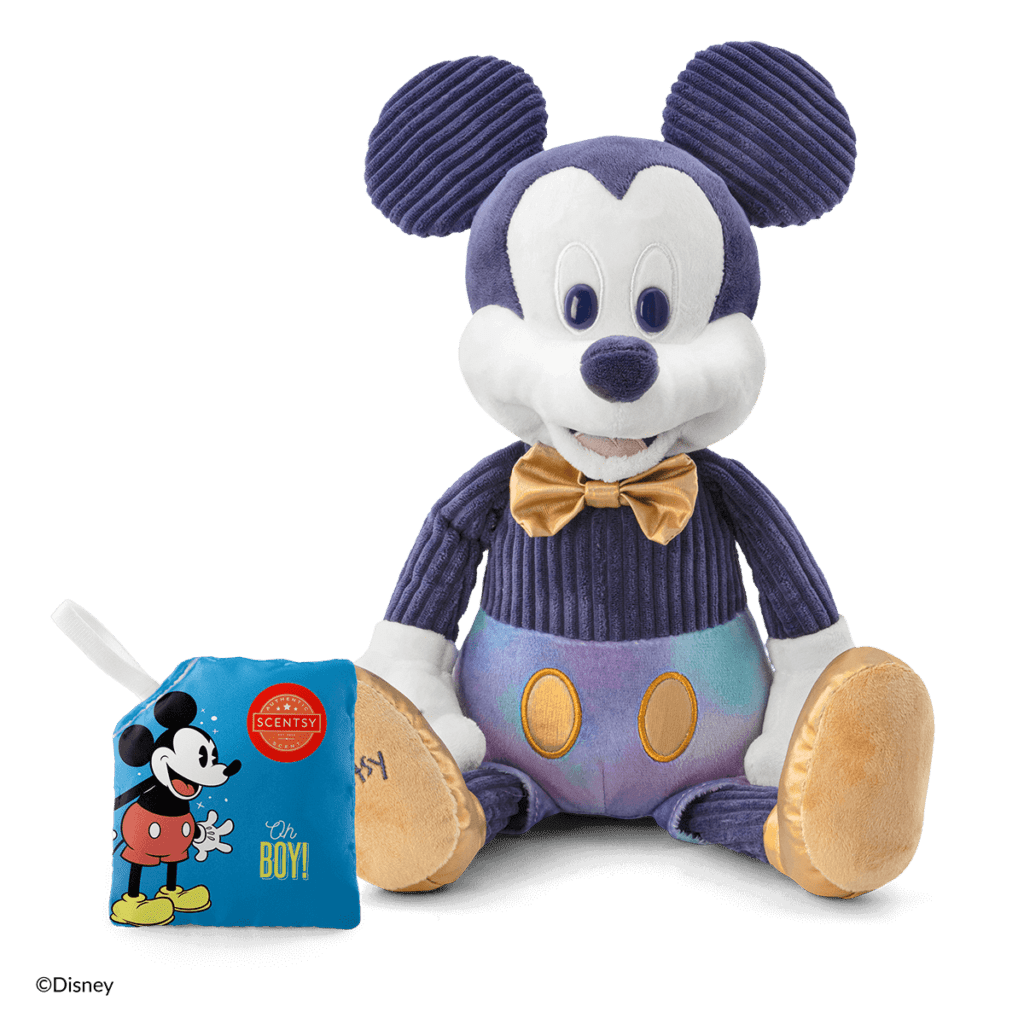 It wouldn’t be fair to release a Mickey Mouse plush without releasing a Minnie Mouse too. Also dressed in EARidescent fashions, Minnie is wearing a beautiful polka dot dress and a beautiful gold bow. The 50th-anniversary crest features on the back of her dress. Like Mickey, Minnie comes with a Scent Pak, but in the Scentsy Disney Totally Minnie Mouse fragrance. She’s also 16” tall and available to purchase for $50. 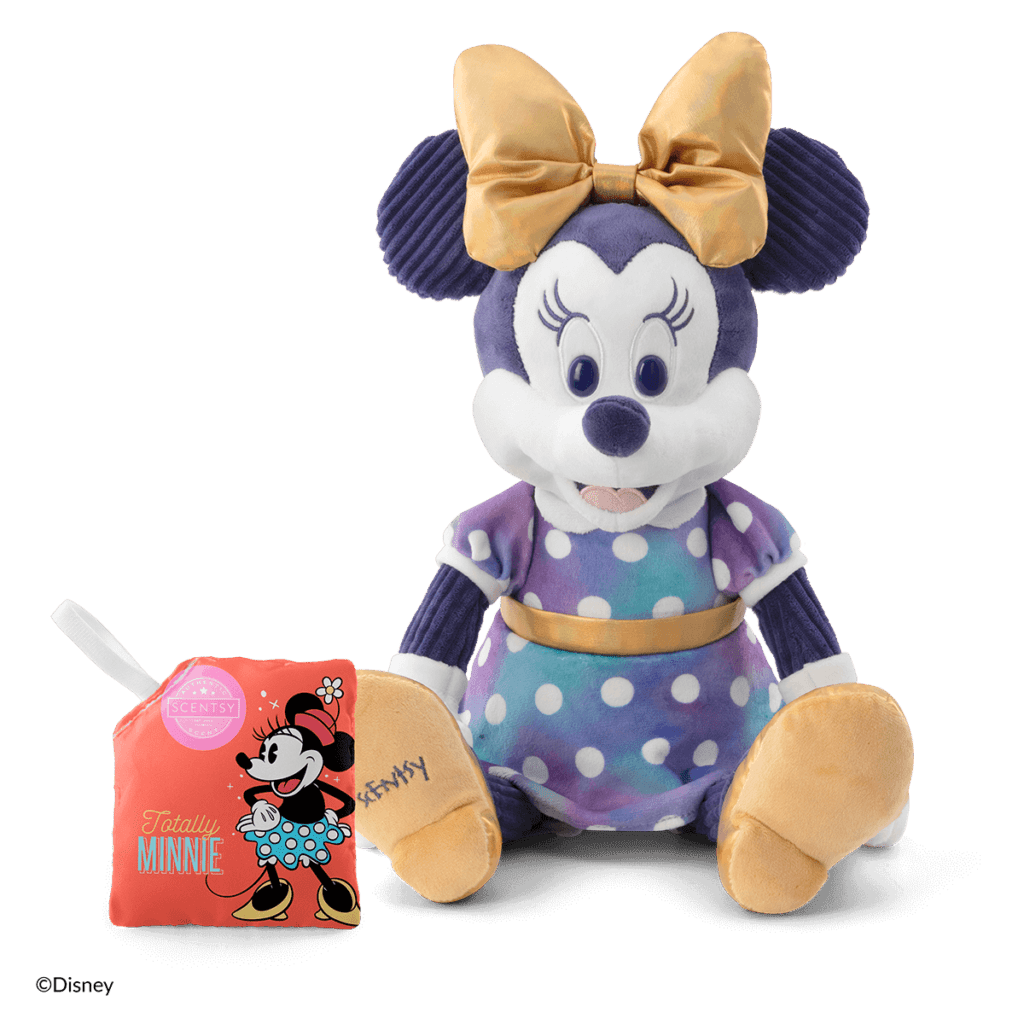 If you’d prefer to buy the Mickey and Minnie Scentsy Buddies as a pair, then you may wish to purchase the Walt Disney World 50th Anniversary celebration Gift Set. Available for $121, the set will include both Buddies, Scent Pak’s, and the EARidescent Scentsy Brick, offering a saving of $5, then buying the Scentsy brick separately from the Scentsy Buddies.

There are 2 additional gifts sets available as part of the Walt Disney World 50th Anniversary celebration range from Scentsy:

Each of the gift sets above offers a saving on the EARidescent Scentsy Brick, which is something to consider if you are interested in multiple items in the new collection. 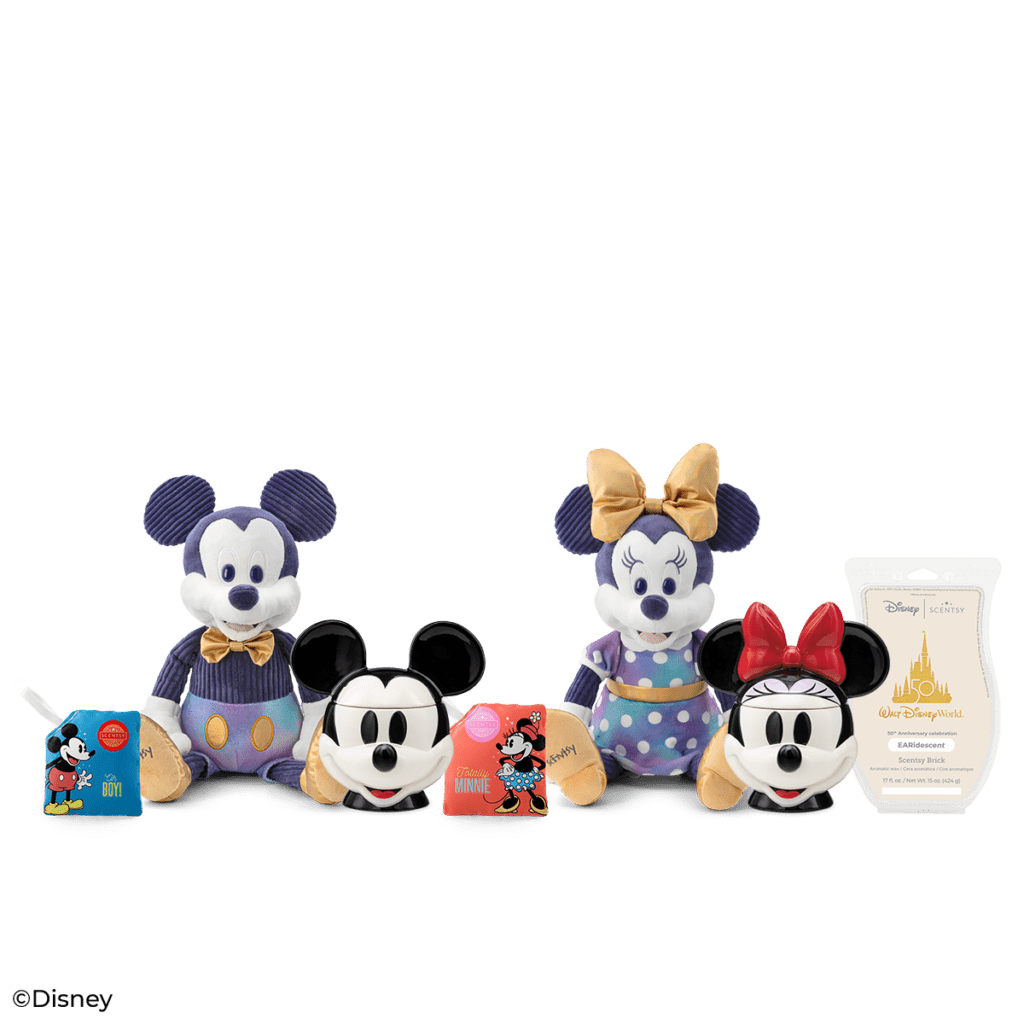 As if the 50th Anniversary pieces weren’t enough, Scentsy is also releasing a festive new warmer on October 10. This magical Christmas tree-inspired warmer features Mickey, Minnie, Goofy, Donald, and Pluto in Christmas hats, with presents under the tree. A larger present offers a place for the wax melts. Available for $60, this gorgeous warmer features a color-changing LED light that helps to make the Christmas tree glow.

The Disney Season of Magic Scentsy Bar comes with a warmer to allow for the true aromas of Christmas to fill your house when your warmer is in use. Enjoy the scent of sugar crystals, frosty icicles, sweet pine, and wild berries. 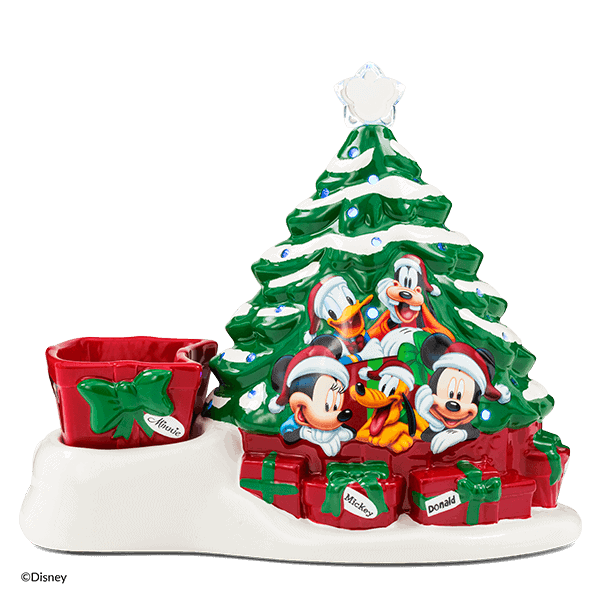 2022-10-08
Victoria Mills
Previous: Night of a Million Lights to Return This Year in a New Location
Next: How to Guarantee a Seat to See Your Favorite Celebrity Narrator at Candlelight Processional