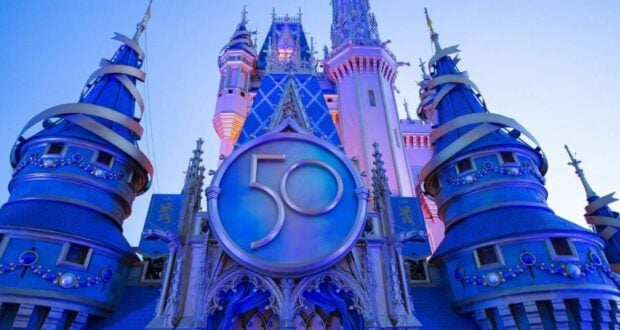 Walt Disney World Resort has been amid its grand 50th Anniversary celebration named “The World’s Most Magical Celebration.” While Disney previously shared that the celebration would last a full 18 months into “March 2023”, we now have an official end date.

Walt Disney World began its 50th Anniversary fun on October 1, 2021. Coming off the COVID-19 pandemic closures, not everything Disney has planned to be available for the 50th was ready, such as Magic Kingdom Park’s TRON Lightcycle Run roller coaster, which is still under construction.

With the Disney World 50th Anniversary celebration, however, we’ve been a new nighttime spectacular at two Parks, including Disney Enchantment at Magic Kingdom and Harmonious at EPCOT. Each of the four theme park icons, including Cinderella Castle, Spaceship Earth, Tower of Terror, and the Tree of Life, have become Beacons of Magic, glowing to synchronized music nightly.

We’ve also seen the addition of new EPCOT attractions, including Remy’s Ratatouille Adventure in the France Pavilion of the World Showcase, as well as the recent opening of Guardians of the Galaxy: Cosmic Rewind in World Discovery.

From merchandise to special 50th-anniversary food and beverages, it’s been a fun celebration thus far… but alas, it will be coming to an end.

Disney has now updated its website to officially announced the 50th Anniverary celebration will end on March 31, 2023, as shown in the screenshot below:

As the celebration ends on March 31, 2023, that does leave us wondering what will remain or even return when April 1, 2023 rolls around. Will the not-so-beloved “Disney Enchantment” be removed, leaving room for “Happily Ever After” to make its return at Magic Kingdom Park? Or how about the future of “Harmonious” at EPCOT?

We’ll share more details with the Disney Tips readers as Disney reveals them over the next several months. In the meantime, be sure to visit Walt Disney World before March 31, 2023, to enjoy all of the 50th Anniversary celebrations while you still can.