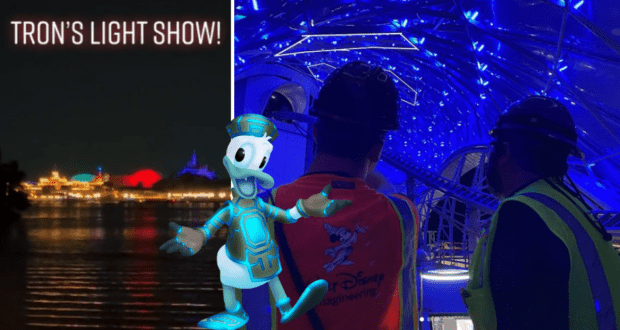 People have been eagerly anticipating Walt Disney World’s coming attraction, TRON Lightcycle Run, for quite some time now. Unfortunately, fans have been getting impatient with the progress, which has been incredibly slow.

Those who have kept a close eye on its progression in Magic Kingdom Park hope to receive an opening date at this year’s D23 Expo in Anaheim, California. The project was initially announced five years ago at its 2017 event. Originally, the sci-fi roller coaster was set to open for Walt Disney World’s 50th Anniversary Celebration. The pandemic played a part in delaying progress on the attraction, much to the disappointment of eager fans awaiting its arrival in Tomorrowland.

Over the last several months, Disney World Guests have posted videos with updates and ride testings. Although exciting to watch, people continue to be frustrated with the lack of news and construction progress surrounding the coming attraction.

But, a TikTok video posted by @lovindisworld may indicate the ride is in the final stages of completion! Although many recordings have surfaced showcasing illuminated ride vehicles along the tracks and the ride’s interior canopy lighting, not much has been publicized regarding the ride’s exterior light show.

♬ All Of The Lights – Kanye West

The TikToker captured stunning footage from across the water of Magic Kingdom Park. Brilliant lights can be seen dancing their way across the experience in alternating shades of green, blue, red, and white.

Although an exciting sight, some Disney fans were underwhelmed and let their feelings be known in the video’s comments section. The majority of negativity came from frustrations about its slow progress, while other gripes centered around the show building.

Overall, the response was positive, with Guests expressing high hopes that the ride would open before the end of the year. Recently, we posted an update regarding TRON Lightcycle Run and the Walt Disney World Railroad, which has remained closed due to construction. A picture of the train’s tunnel traveling through the new ride indicates progress on both attractions, with bolts in place, ready to secure the track. The new train route will be a visual feast for the eyes at nighttime, based on the epic light projections donning the ride.

We will keep you posted when we get news about these beloved attractions or the dates for their opening!

2022-08-23
Christy Weinberg
Previous: The Best Disney Restaurant No One Talks About
Next: Abuse or Clever? Another Controversial Disney Hack Draws Concern