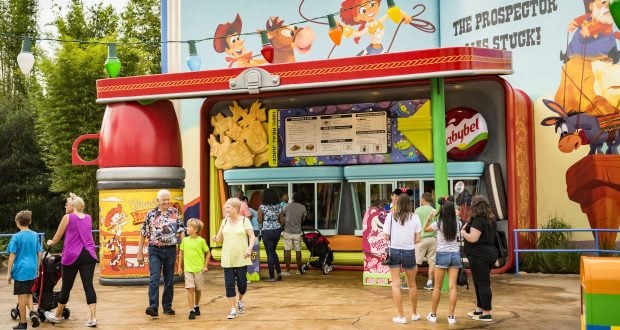 Quick service restaurants are ideal for Guests who don’t want an expensive table service meal, but instead a casual bite to eat that’s cost-effective and quick, allowing you to get back to your day in the Parks.  Disney’s Hollywood Studios has several quick service options to choose from.

While they don’t all have the fabulous theming and exotic tastes you’ll come across in Disney’s Animal Kingdom or EPCOT Theme Parks (with the exception of quick service eateries in Toy Story Land and Star Wars: Galaxy’s Edge), there are some absolute gems that will have you coming back for more.  Here are some quick service restaurants in Disney’s Hollywood Studios that you can safely skip – and a few to visit instead.

Formerly Pizza Planet, you’ll find PizzeRizzo close to both Star Wars: Galaxy’s Edge and Muppet Vision.  It has abundant seating outside as well as (air-conditioned) inside, which is a plus on a hot Orlando day.  But this quick service restaurant is not worth a visit unless you have some serious Muppet fans in your party – and even then, you’re better off just walking through to check out the theming (Rizzo the Rat) and fun nods to the Muppets.

As its name suggests, PizzeRizzo is all about the pizza, which is fine if you’re not picky about pizza quality – otherwise, steer clear, because your local pizza shop probably has superior pizza.  There are a couple of other basic Italian-inspired dishes, but we’d recommend skipping this one.

Eat At: Docking Bay 7 Food and Cargo Instead

The details here are spectacular, and Guests can dine inside a shipping container and sit on colorful barrels, or choose the outdoor seating area with magnificent views of Black Spire Outpost.  You’ll want to wander around and appreciate all of the creativity poured into this eatery by talented Imagineers!

Food here is listed as “American”, but looks otherworldly and features some surprises with fun intergalactic names, like Smoked Kaadu Pork Ribs and Pirjanad Hot Chicken Tip Yip.  This is hands-down the best quick service eatery in the Park.

The indoor palm trees and posters of famous tv shows at ABC Commissary are pretty cool – but that’s about all we can say about this quick service restaurant off Commissary Lane in Disney’s Hollywood Studios.  This is a glorified cafeteria, and you can do better, both with respect to theming and to food.

ABC Commissary features predictable quick service lunch and dinner fare, including burgers, salads, and tacos.  The one upside of this restaurant is that it boasts a ton of seating, both inside and out, and we’ve rarely seen it crowded, so it’s a good option if you’re desperate for a bite to eat and everywhere else has lines.  Otherwise, skip this one.

Eat At: Backlot Express Instead

This restaurant has the best theming of any quick service Hollywood Studios spot outside of Galaxy’s Edge or Toy Story Land, which in itself makes it worth checking out.  It takes Guests behind the scenes to a movie studio workshop, with numerous themed areas featuring movie props in various stages of completion.

It’s worth taking a stroll around the restaurant, because you never know what you’ll find (the workshop signs and notes to/from crew members are pretty funny, if you can find them).  Food here, while perhaps not as inspired as you might hope, does sometimes include some great items like Chicken and Waffles, or Roasted Pulled Pork.

With one of the most limited menus of all quick service restaurants not only at Disney’s Hollywood Studios but on WDW property, this is an easy skip.  Dockside Diner currently boasts only three entrees (Shrimp Salad Roll, Smoked Fish Dip, Chipotle Chicken Salad Roll) and one dessert (Seaside Brownie).  It also has very limited hours to go with its limited menu, and in fact, on days when the Park expects minimal crowds, it may be closed altogether.

Located in the Echo Lake area of the Park, Dockside Diner has outdoor seating, and Guests can enjoy the nods to classic films on the cargo boxes here.  But we’d recommend skipping this one and taking your business to a quick service restaurant with a more extensive menu and legendary theming.

Eat At: Woody’s Lunch Box Instead

Any Guest who appreciates unique dishes and a dose of whimsy should ensure they stop at Woody’s Lunch Box in Toy Story Land at least once during their day at Disney’s Hollywood Studios.  This quick service restaurant doesn’t have the most extensive menu in the Park, but then again, you won’t need one with the childhood-inspired fare here!

You can’t go wrong with the signature Tochos (loaded tater tots) or delicious Lunch Box Tarts in three different flavors.  Seating is outdoors here, and if you’re lucky, you’ll be able to snag seating made from a ginormous piece of Babybel cheese.

Guests generally don’t expect fine dining experiences at Walt Disney World’s quick service restaurants, and some of the options at Disney’s Hollywood Studios are mediocre at best and can easily be skipped.  Others, though, offer surprisingly rich theming and tasty meals that just may exceed your expectations.