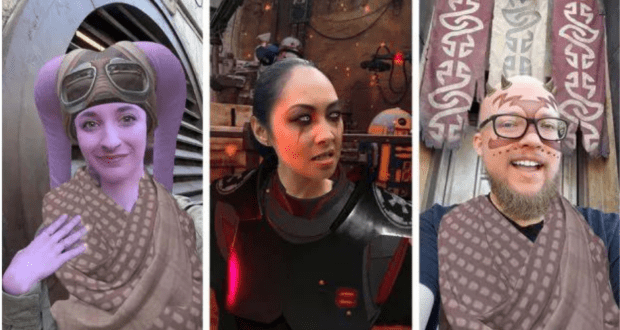 Have you tried out the PhotoPass lenses with Disney Genie+? Love Star Wars? Disney just shared some exciting PhotoPass news that could help you capture some out-of-this-world memories on your next Walt Disney World vacation!

Disney PhotoPass lenses are a part of the paid version of Disney Genie+ within the My Disney Experience app, but the Disney Parks Blog just shared that some of the newest Star Wars lenses will be complimentary for a limited time. You can access the lenses for free through your Snapchat app. Just navigate to the profile for Disney PhotoPass Service and check out their lenses. There you’ll find a variety of Star Wars lenses you can use free of charge now through June 7, 2022.

Included in the lenses are options to transform into a Zabrak with horns showing through your head, or looks that can make you into a Twi’lek or Togruta. The best part? While these lenses can make for some fun photos at Walt Disney World (especially if you are visiting Star Wars: Galaxy’s Edge in Disney’s Hollywood Studios) they can be used right from home through June 7.

The new lenses are complimentary for a limited time as Disney Parks and Resorts join in celebrating the new Obi-Wan Kenobi (2022) series on Disney+. At Walt Disney World, Disney Springs is celebrating the series’ release with galactic-inspired twists on classic Disney snacks. Beginning June 8, 2022, the lenses will be found in the My Disney Experience app for Guests who have purchased Disney Genie+. The lenses will be available once a Guest with Genie+ enters Star Wars: Galaxy’s Edge at Disney’s Hollywood Studios.

Additional PhotoPass lenses included in Genie+ include virtual backgrounds of the Cinderella Castle as a birthday cake from Walt Disney World’s 25th anniversary, as well as shots with Grogu, and some extra Expedition Everest-inspired magic.